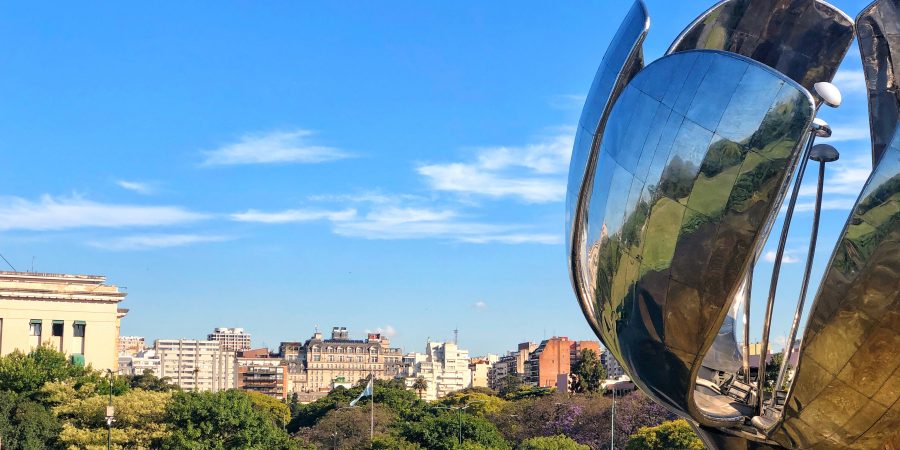 So after adventuring about in Patagonia for 3 weeks, on both the Chilean and Argentinian sides of the border, we hopped up to Buenos Aires. Here it is summertime so it’s a toasty change up from the chilly weather in the south of South America. We spent a week decompressing after so much hiking and being on the go, along with exploring this crazy big capital city.

Between really enjoying Buenos Aires and having a strong desire to nest a bit (unpack, cook, get a gym and call somewhere our home), we decided why not get a place here for a while? Especially with the holidays approaching, making hotels both more expensive and less available, it seemed like the right time.

So we’re here a month!

Plus after having spent a week here already, we had a better sense of which neighborhood we wanted to spend our time. We’ve now gotten ourselves situated and nested a little. We’re enjoying this beautiful city, exercising, relaxing, meeting some fellow expats, and working on a couple projects.

BsAs (as the cool kids down here write it) has almost 16 million people in metro area, so it’s clearly large. But we’ve also found it to be not overwhelming or super crowded anywhere.

It is very neighborhoody, with Recoleta, San Telmo and Palermo being the hip spots, especially for tourists and expats. We have chosen to live in Palermo for the month, to enjoy the great restaurants and nice cafes. There are a lot of beautiful parks and trees lining the streets.

The older buildings around the city have European charm to them, while the Puerto Madero area is filled with large, brand new modern skyscrapers lining the water.

Easy to Get Around

We’ve found it to be very walkable with huge sidewalks. Only word of warning is to watch out for cars at intersections. Stop signs are more like yield signs here, and cars seem to have the right away regardless of the crosswalk markings. If it’s a street light though, you’ll be totally fine once the crosswalk light comes on.

If you don’t want to walk, it is very easy to get around with Uber, public taxis and solid public transportation like their subway system.

You’ll see dog walkers are everywhere and they’ve got a serious job here, as usually they have at least 5 dogs at a time. I’ve seen one guy walking at least 10 at once!

That does also mean you always have to watch where you step, as dog poo on the sidewalks is not uncommon. Some people do seem to be gracious enough to pick up after their pet, but certainly not everyone.

Easy Living… But Speak Some Spanish

It’s overall easy to get around, but knowing Spanish is really helpful, if not a necessity. We know enough to get by – order food, get our laundry done, say hi – but it is limiting. Most residents don’t speak English and there isn’t a huge amount of expats here, as opposed to somewhere like SE Asia where everyone is English speaking.

We have found it to be really safe here. I had originally heard lots stories of people getting pickpocketed or their purses stolen, and while I’m sure that can happen, we’ve not had any issues. I can walk around by myself without issue and haven’t felt on guard.

Obviously, like in any big city, don’t do something stupid like wandering through a dark park at 3am and be vigilant of your belongings, but otherwise no need to worry.

Thanks to the Argentinian Peso not doing well with their constant economic problems, it’s been cheap living for us. For $15, the other night I got a great dinner of tapas and two glasses of delicious local wine! And Crossfit, my favorite way to balance out all the food, is only $35 per month! (For you non-crossfitters out there, it’s about $150-200 per month back in the US!)

It’s not the easiest for a vegetarian who wants to be healthy, as they love steak here and supposedly it’s really good. That being said, I have been able to find some great cafes with smoothie bowls and salads.

Argentinians are mostly all obsessed with the bitter green tea like beverage of mate. It’s loaded with caffeine and they drink it all day long. We tried some at the Argentine Experience dinner, and can’t say either of us are going to be picking it up anytime soon.

Wine from Mendoza or Salta regions is the drink of choice and they pour it in generous quantities. Plus it’s only $3-5 for a BOTTLE of good wine at the store! Beer and cocktails can be found, but they certainly are not as common.

Empanadas are the quintessential snack. Fluffy dough filled with anything from chicken to (my favorite) cheese, corn and onion, then baked until crispy and warm. For less than a $1, they’re perfect when you’re hungry.

Produce is excellent and nearly every other storefront is a shop selling high quality fresh fruit and vegetables.

But don’t forget the sweets. Dulce de leche, a caramel like sauce, is put on everything from toast at breakfast to cookies (to make my favorite alfajores). The grocery stores have aisles dedicated to it.

Find Some AC – It is HOT

It’s summer here in the southern hemisphere and BsAs doesn’t mess around. Yesterday was a balmy 97 degrees. Yikes. Fortunately our apartment and most restaurants and cafes have AC, otherwise I’d melt.

2 thoughts on “Life in Buenos Aires”