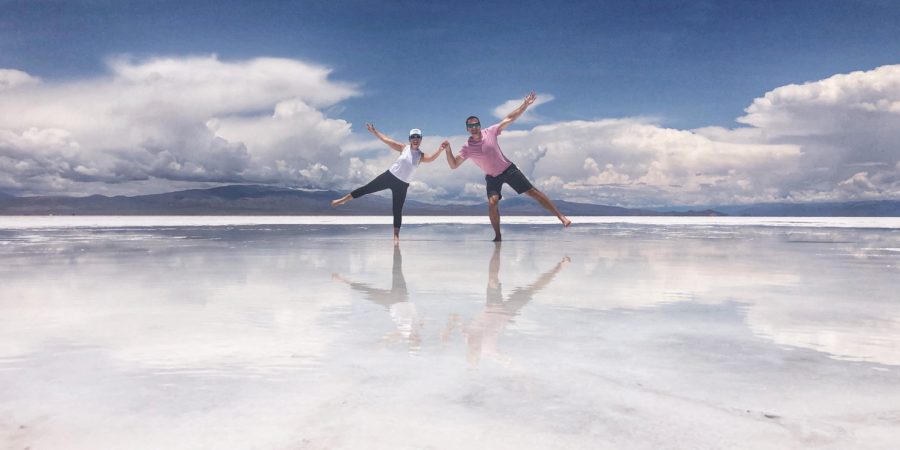 Given the political unrest in Bolivia, we sadly chose not to go to Bolivia’s Salar de Uyuni like we wanted to do. The dried up prehistoric lake is the world’s largest salt flat. It looks stunning. So I was bummed.

But then we found out that in northwestern Argentina, there also are salt flats! Salinas Grandes are not as large and perhaps to some, not as impressive as those in Bolivia, but hey we would get to see some salt flats and we were already in Argentina, so it was much easier all-around.

Located in the Jujuy province on the border of both Chile and Bolivia, this region has beautiful colored mountains and reminded me so much of Peru – the look of the people, the Quechua language being spoken, the music comprising mostly of flutes, the llamas everywhere. Even the tourist things being sold were similar – like the llama sweater I bought in Cusco two years ago was for sale there!

Now as for the salt flat, let me just say, I was impressed. They are INCREDIBLE!

We went in the “rainy” season which was great because there were large puddles that showcased crisp reflections, just like mirrors on the ground.

From the parking lot, you walk around an area of the salt and take lots of pictures. But, pro tip: take a guided car tour.

This one-hour guided tour that allows you to drive out onto the salt. It was a crazy experience. For only 400 pesos (as of January 2020, that was only about $5 USD), you get further out away from the crowds and of course get lots of ideal photo opportunities.

From the tour, you can also see the cuts into the salt, which are about 2 feet deep and fill with rainwater so the local communities can harvest the salt once the water evaporates.

The guides, who are from the nearby indigenous villages, only speak Spanish but it’s still worth doing. If you do happen to speak Spanish or have a translator, you can learn some interesting things about how they use the salt.

You do need a car for the tour, but if you don’t have one, try asking at the entrance if you can join in with someone who does.

You’ve got a few options.

Purmamarca. The closest town to the salt flats, about an hour up a windy, steep road. We stayed there for two nights to do the salt flats. It is a realllllly tiny tourist town. I’m pretty sure you could walk every street in the town in about 20 minutes. It’s quite cute with its dirt or cobblestone streets and Mountain of Seven Colors in the background.

Tilcara. We spent the last two nights in Tilcara, which feels huge compared to Purmarca but is still quite small. Here you’ll find a few better restaurants and hotels, cell service and more great views. It’s about 1.5 hours from Salinas Grandes, and only 20 minutes north of Purmamarca.

In Tilcara, Las Marías Hotel Boutique was a nice hotel with spacious rooms, a little gym and pretty good breakfasts. They also offer on-site massages which were top notch and only $20 for 50 minutes!

Salta. Stay in the small city of Salta allows you to be close to the airport and chain hotel options, but big downside – it is about a 4-hour drive south. But if you need to do this as a day trip for some reason, it’s a doable option. Casa Hernandez B&B in the charming town of San Lorenzo just outside Salta was an excellent place to stay with the most welcoming Dutch owners!

Where to Eat in Purmamarca and Tilcara:

So many of the restaurants in town have live traditional music which we really enjoyed. The food was so so at most places but the music makes up for it.

Get “tortillas.” A roadside snack that are found everywhere in town. For only about 25 cents, you get a handmade slightly thicker tortilla filled with cheese and nearly whatever else you want (my favorite was corn but Brice’s was tomato and basil), then grilled in front of you to crispy, melty perfection.

El Nuevo Progreso in Tilcara. Slightly on the fancier side, this is an excellent stop for dinner with modern food and friendly service. Our highlight for meals in town.

What Else to Do:

The Cerro El Porito hike in Purmamarca. An easy 3-4km walk around the town with more views of the Cerro de los Siete Colores (Mountain of Seven Colors).

Garganta del Diablo Waterfall hike. After a somewhat harrowing drive up a narrow and windy gravel road, that somehow is meant for two-way traffic, we made it to the small waterfall. It’s a short hike and the falls aren’t very impressive, but the gorgeous views of the valley is worth the drive.

Quebrada de las Señoritas gorge. Another pretty hiking area. This might be better served with a guide as we turned around quickly after losing the path.

Hornocal (Mountain of 14 Colors) viewpoint. We sadly didn’t get to do this despite how excited I was. The reasons to not go?

None of those would have been deal killers on their own but all combined made us do something else. If you do go, send me a photo so I can live vicariously!