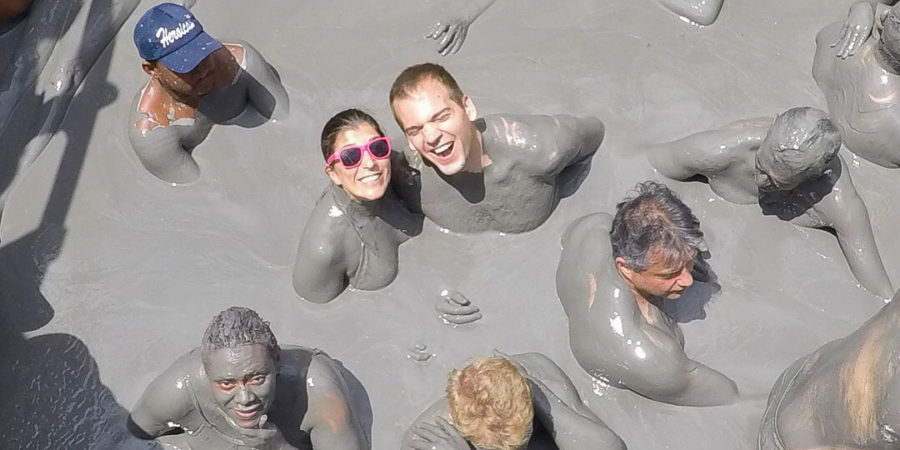 Let’s now flashback to a few weeks prior when Brice and I were still in Cartagena, Colombia. Brice had read a good day trip was to El Totumo, a small volcano made of mud that you could climb into for a “spa treatment.”

It was pitched as probably one of the weirdest experiences you’ll ever encounter, but you shouldn’t miss it.

Bright and early, we hopped in the bus along with 15 other crazy tourists. We had a small bag packed with swimsuits, towels and our GoPro, we were as ready for whatever exactly laid ahead as we could be.

After about an hour, we spotted the strange 50-foot tall mound of earth (definitely not what you’d think when you hear “volcano”) just sticking up out of the ground. 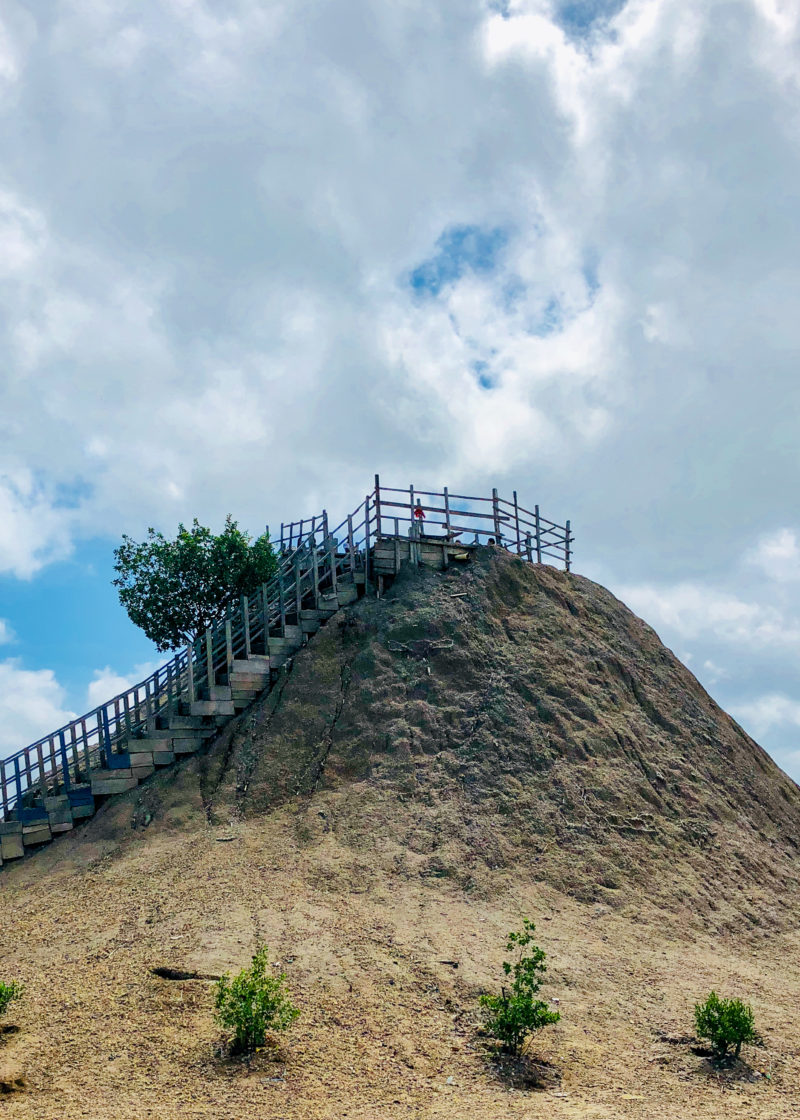 Lined with some stairs and a wonky looking wooden fence around the top, that was our destination. We were told to get changed into swimsuits and leave everything else in lockers unless you wanted it caked in mud.

Fortunately there was a nice guy who’s sole job is to take photos for less than $2. The whole thing was a surprisingly professional operation so there was no concern he was going to steal our things. Every few minutes, we would yell “Señor! Photo?” and away he would snap.

In the Mud We Go 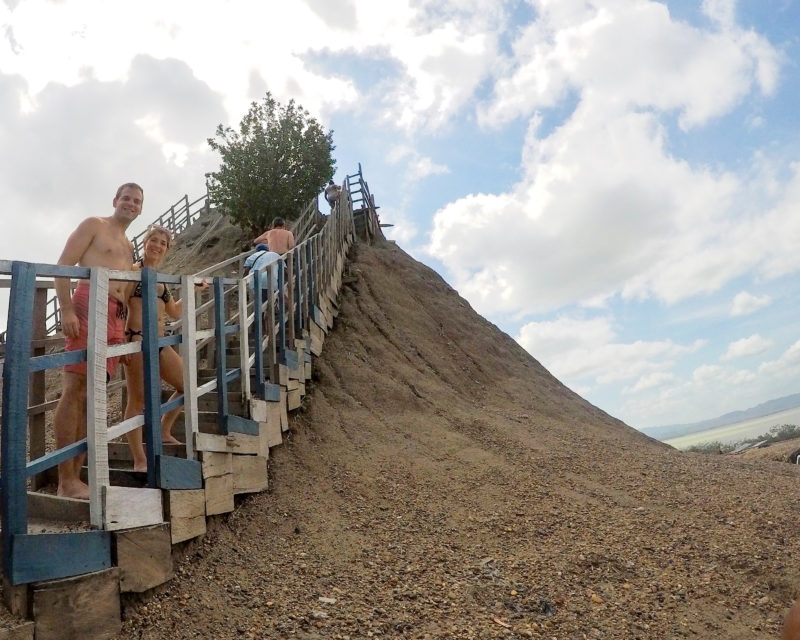 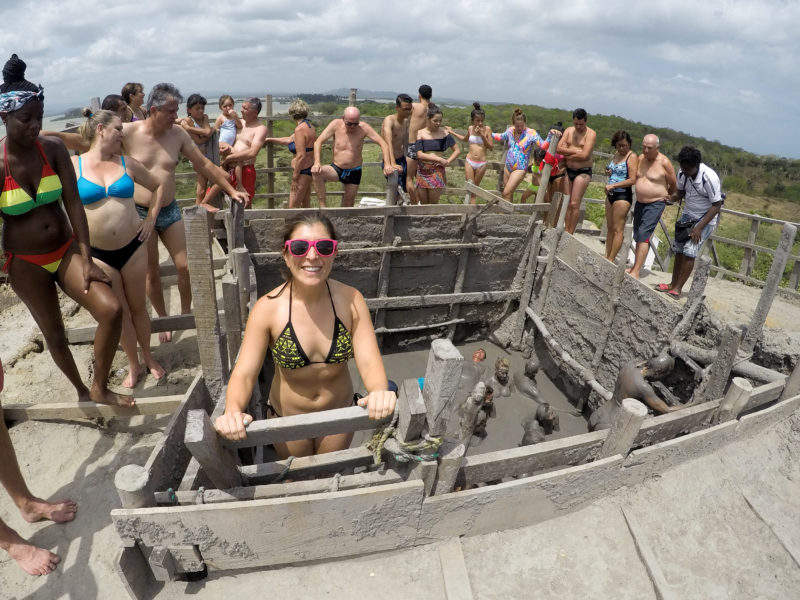 We climbed the few steps and then were able to peer in to what might have been the strangest site I’ve ever seen – 15-20 people smothered in mud, floating around in a tiny circular hole, and getting massages from the Colombian “spa” workers. And we’re going in?!

Finally my turn came – down the little ladder into the mud. The last step, one of the workers helped me into the mud. It was a bizarre sensation.

The mud felt warm and somewhat creamy, yet also a little silty. Despite the mud supposedly going down to a depth of 2,500 meters or so, you don’t sink. Instead, you can just kind of stand in this weird, super viscous goop.

Then Came the Spa Treatment

One of the pitches is that this volcano has mineral deposits that are good for your skin – calcium, magnesium, aluminum and more, they say! You know that whole mud mask business? Imagine that, but for your entire body.

The legend is that a local priest declared volcanic eruptions were caused by the devil himself, and after dousing holy water onto the volcano, the lava was transformed into mud with healing powers.

So why not add a massage from a strange Colombian guy while you’re at it?

Because gravity somewhat disappears in the mud, I had to be essentially rolled over to get onto my back where I could just float there. By no means is the worker a trained masseuse and the strange environment made it impossible to be relaxing, but surprisingly the short massage of my legs and arms was not bad and very professional (I didn’t experience any creepy groping like some other bloggers have written about). Plus talk about a memorable massage! 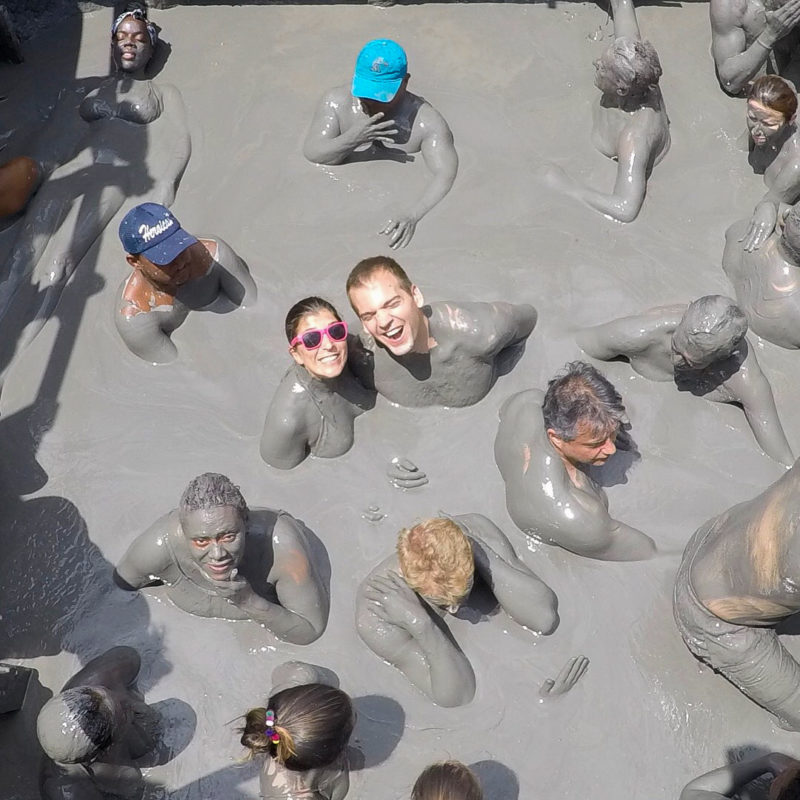 Next, I was pushed to the “hang out area” of the mud pit where Brice and some other tourists were “sitting” and laughing about the experience.

Because it is only about 15-feet wide inside the hole, it gets crowded. Add to that that no one can really control their limbs in the viscosity, you become acquainted to your fellow mud bathers real fast. People’s legs were pushed into me, arms flaying around, mud splashing in the face. Awkward yet hysterical.

Once we were ready to be done, up the slippery mud-caked ladder we went. At the top, another worker basically squeegeed off the excess mud with his hands. Given the heat and intense sun, it started to dry and cake almost immediately. 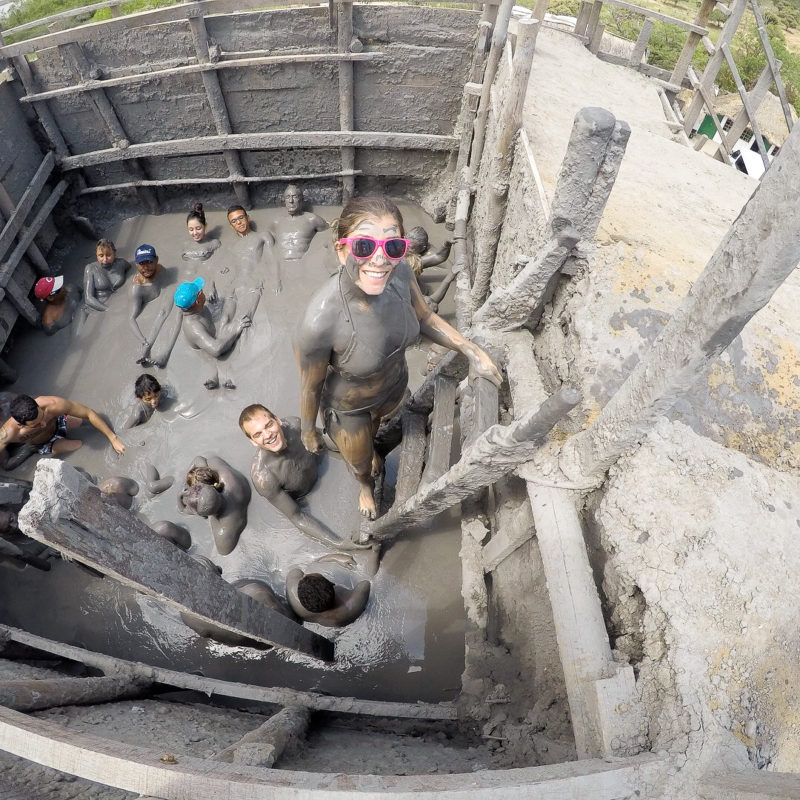 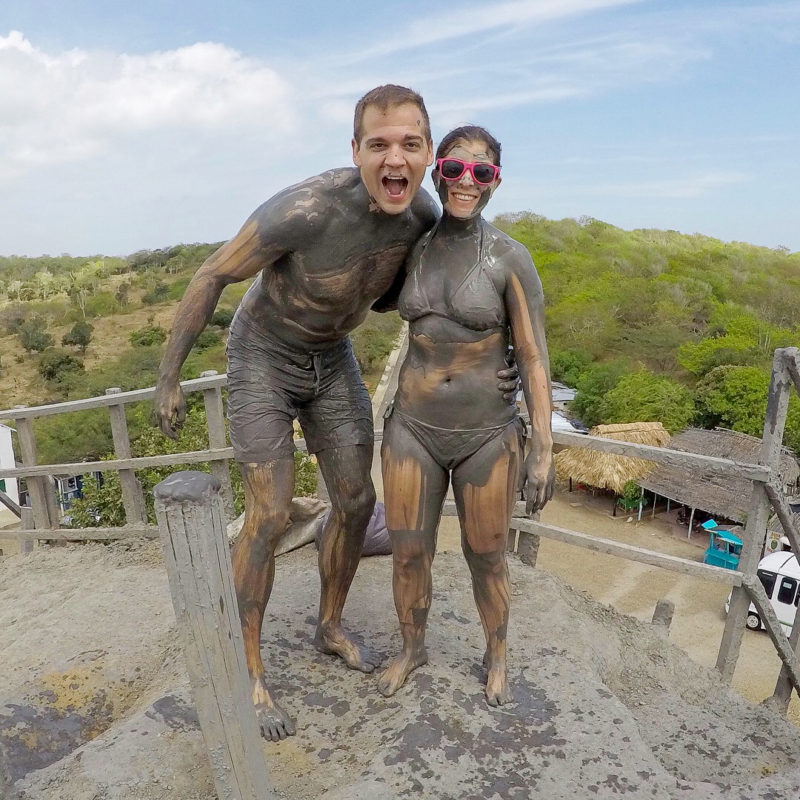 We were directed down the stairs to the nearby lagoon, where we were to be bathed and cleaned by the local women. Another adventure, here we come!

“I think this is the dirtiest I’ve ever been!” Brice exclaimed, looking at his arms in fascination and we stepped into the lake. Two brusque women approached us with buckets in their hands, instructed us to sit on the lake floor and began the dumping of water over our heads.

There Goes Your Swimsuit

After getting our arms and legs quite clean, I heard Brice both yelp and giggle at the same time as I noticed his swimsuit was now off and the lady was vigorously cleaning it by hand. Ok then!

That part was not just for men, apparently. Next, my top was being taken off. Laughing hysterically, I agreed because hey, I did want a clean swim suit! Fortunately the lake was just deep and murky enough to not be outwardly naked.

Soon after, we stepped out of the lake, almost spotless.

Did that all really just happen? We could not stop laughing and saying “what was that experience?!” The reports we read were correct – one of the strangest moments I’ll have, touristy for sure, but so much fun.

And for only about $30 a person for the full day, it was well worth the story and all the laughs.