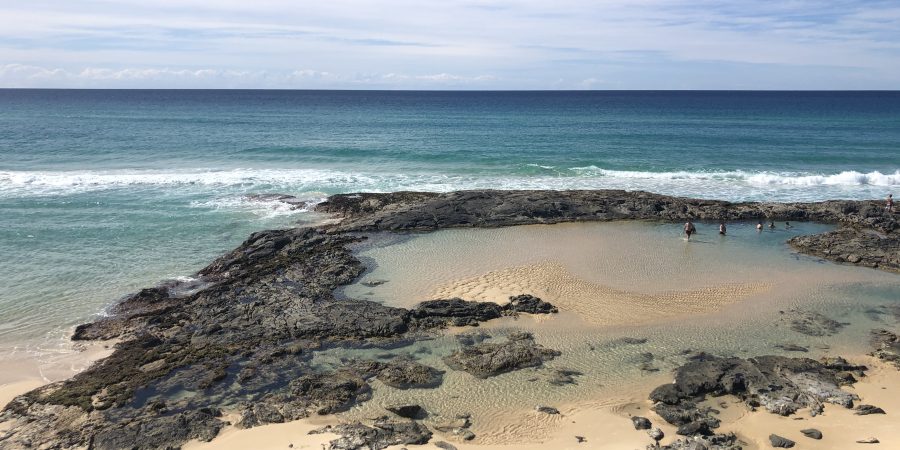 One thing we kept reading about when researching the east coast of Australia was Fraser Island, a massive national park on the world’s largest sand island.

What exactly does a sand island mean? Well over 750,000 years, sand from the ocean kept accumulating in the same spot until an island was formed. It is now over 700 square miles with a length of 75 miles. Nearly the entire island is covered in trees, an impressive fact when you remember there isn’t nutrient-rich soil but just sand everywhere on the island.

Visiting this World Heritage Site, that was also visited by the famed Captain Cook, had to be on the itinerary.

We spent three days exploring the island with Cool Dingo Tour, as we love group tours and perhaps more importantly, getting around by yourself is nearly impossible – almost all the roads are sand. That makes for some adventurous but extremely challenging driving. While you can rent a 4WD vehicle there, it is crazy expensive plus you’re pretty much guaranteed to get stuck if you don’t know how to drive on those “roads.” Or even if you do, you’ll likely still have a problem like us, when we hit a massive tree root that crushed our bus tire. We all found it fun though!

When not digging other cars out of the sand, we spent our days admiring the forests and exploring the perched dune lakes on the island, like Lake McKenzie. There are only 80 on the planet, with almost half of them on Fraser Island. These above-sea-level lakes are formed when the wind creates a depression in the sand dune, which later hardens and fills with rain water. Gorgeous and impressive.

One top feature of Fraser Island is driving on the “beach highway,” which truly is a government-operated highway on the beach with an 80km speed limit.

As we were cruising along on Day 2, we spotted two small planes, also on the beach. The bus slowed and the pilots hopped on, pitching the 15-minute flight that would fly over Fraser Island. Without giving myself enough time to doubt the safety of a miniature plane that takes off and lands from a sand runway, I said yes. And so happy I did. Seeing how massive and green the island is, the shades of blue in the ocean, and the colorful lakes, from that perspective was amazing.

Another big reason people visit Fraser Island is to see dingoes in the wild. There are about 200 that live on the island. They look like scrawny dogs, but apparently can actually be aggressive (remember that whole “a dingo ate my baby?” That was true!). They are also crafty, figuring out how to open drink coolers and snag food from campers!

Fraser Island is an incredible place. So glad we had the 3 days to explore its beauty, meet some great people and have some more fun stories and photos.