When Brice a few months back pitched going to the Untold Festival, I admit I didn’t know much of anything about Romania. I had heard of Transylvania of course (thanks to Dracula), but didn’t even really know where it was on a map. If you’re like me, turns out, it’s the large central part of Romania!

With lush mountain ranges, medieval towns and numerous castles, I was intrigued to use the festival as a reason to check out the area. So we set up two weeks to explore three main cities in the region: Cluj-Napoca, Braşov and Sibiu once the festival got over. 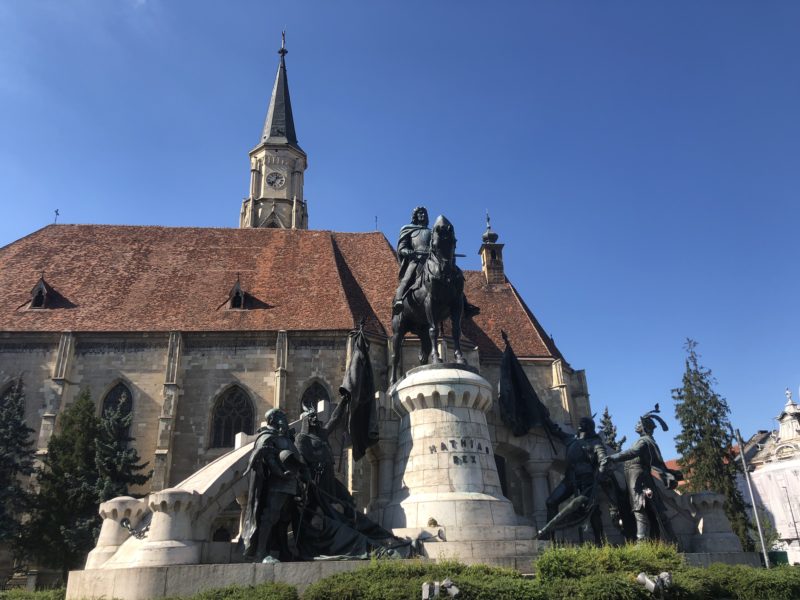 If you are vegetarian, be aware you won’t find a lot of options other than carbs. But we were able to enjoy some good food!

Ciao New York in Cluj. This Italian restaurant was recommended to us by the owner of the Prosecco Van as one of the best places in Cluj. It had excellent pasta, a cozy yet chic space, great wines and nice staff.

All the Covrigi! We ate a lot these Romanian baked goods that are similar to pretzels. Though not as salty as the German pretzel, these fluffy cheap snacks were really delicious and available at numerous walk-up bakeries all over Transylvania.  From the traditional ones loaded with sesame seeds to fluffy cheese topped versions to sweet covrigi filled with apricot jam, we gladly tried plenty…for research of course.

Chimney Cake. Actually from Hungary, this street food is so good and dangerous. It is a slightly sweetened yeast dough cooked on a spit, like a rotisserie. It is then rolled in butter and coated with cinnamon sugar. Just pull off strips of the sweet dough with its caramelized exterior and enjoy. 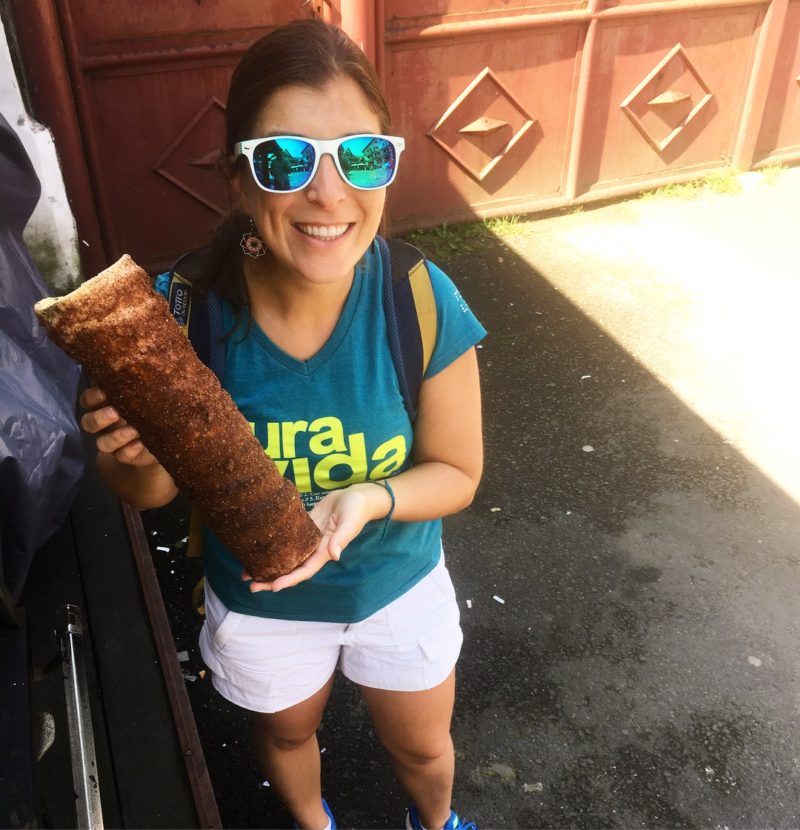 Simone in Brasov. We found at least one vegetarian friendly restaurant while in Romania. The service was friendly but really slow, however the fresh juices and veggie-packed delicious meals were worth the wait.

Exploring the Transylvanian Architecture and Main Squares. As there was a large Hungarian influence in its history, this area of Romania is known for its medieval squares and red-roofed buildings. All of the cities have big pedestrian-only squares as the epicenter of town, with restaurants and cafes with outdoor seating, fountains or sculptures and lots of people enjoying the summer. There are so many colorful houses and small streets. 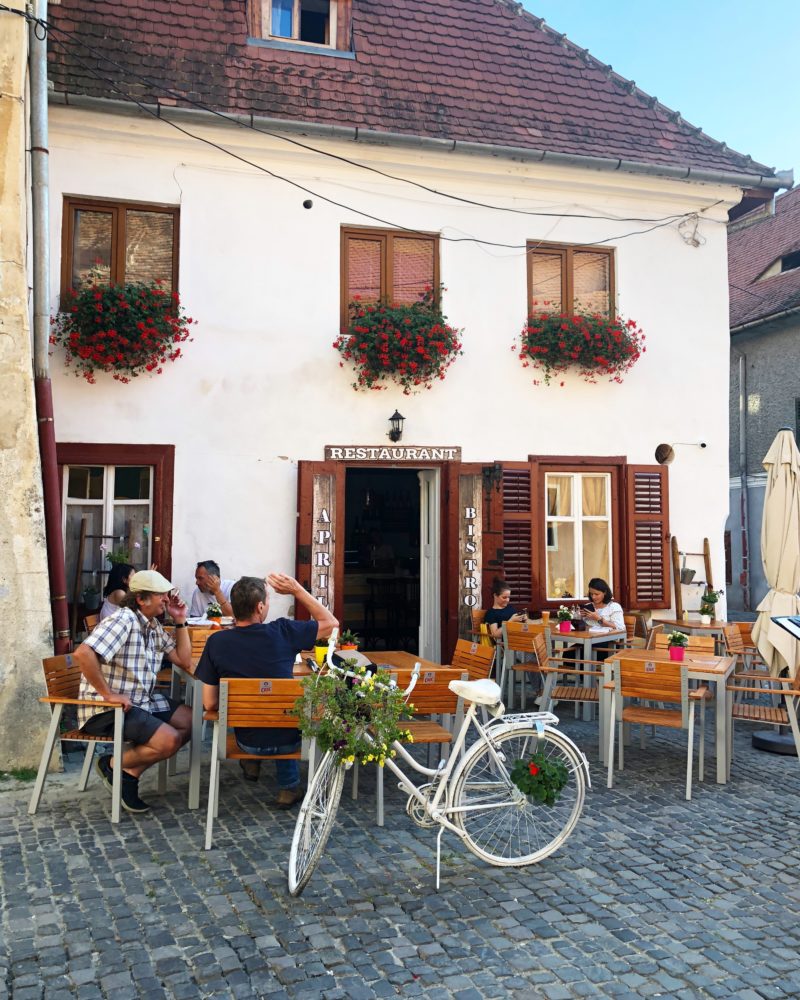 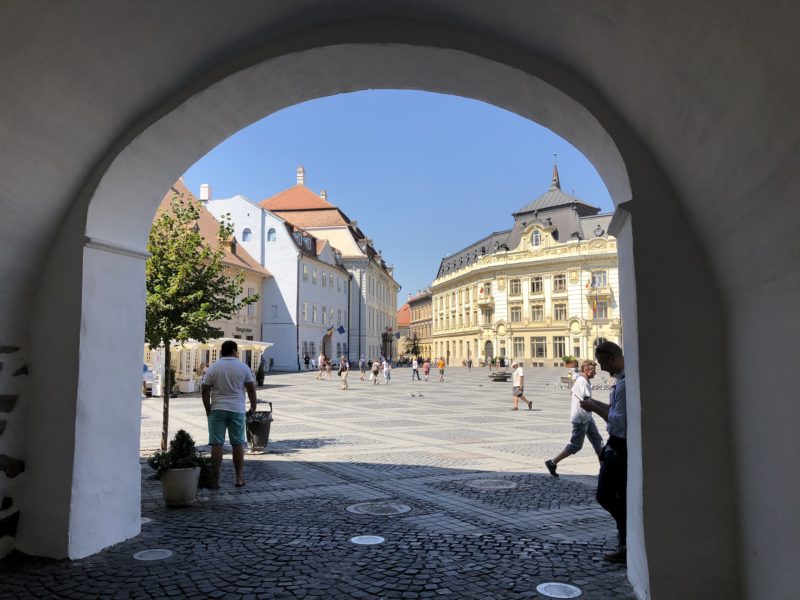 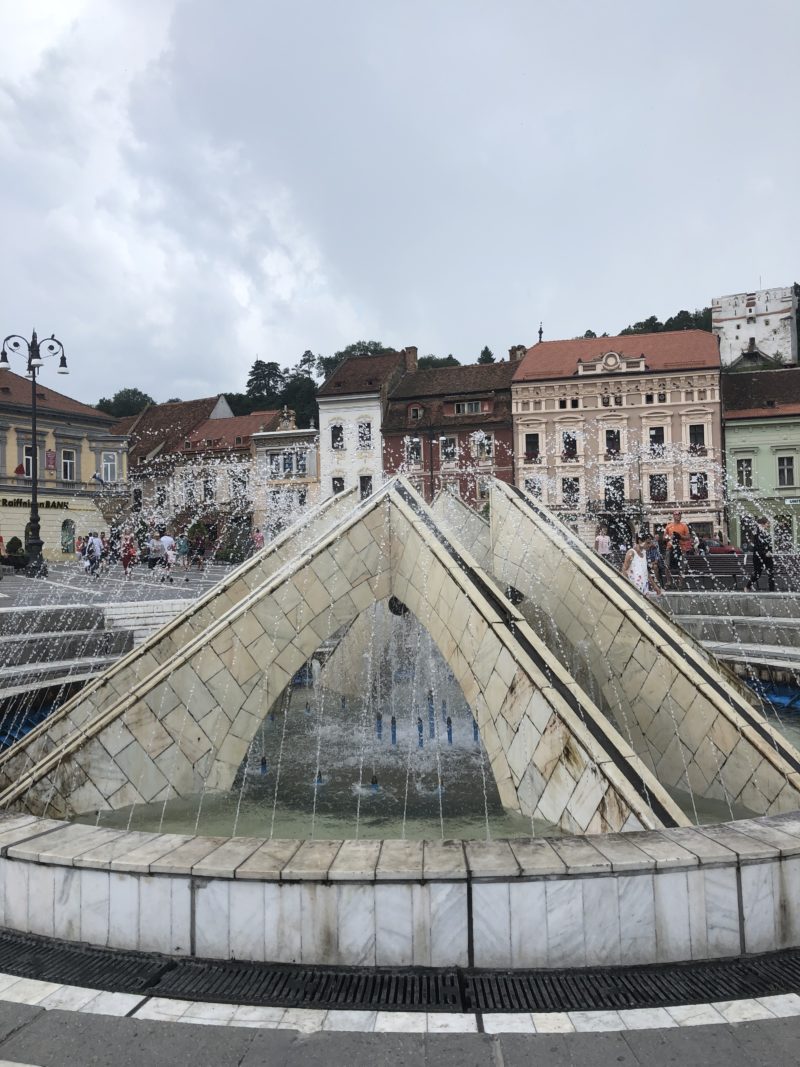 However the charm of the historical centers are offset by the Soviet architecture that also exists. In particular, where we stayed in Sibiu which was outside the historical center, was just Soviet-era block housing everywhere. The bland, uniformed high-rise buildings were a good reminder that Romania was “behind the Iron Curtain” of communism not too long ago.

Climbing to the Top of the Braşov Sign. To get in some great views and work off all the pretzels, hike up to the top of the Braşov version of the Hollywood sign in LA, high above the city. It only takes about 90 minutes to walk to the top, though it is at times a bit steep. If you aren’t feeling up for the walk, you can also take the cable car. 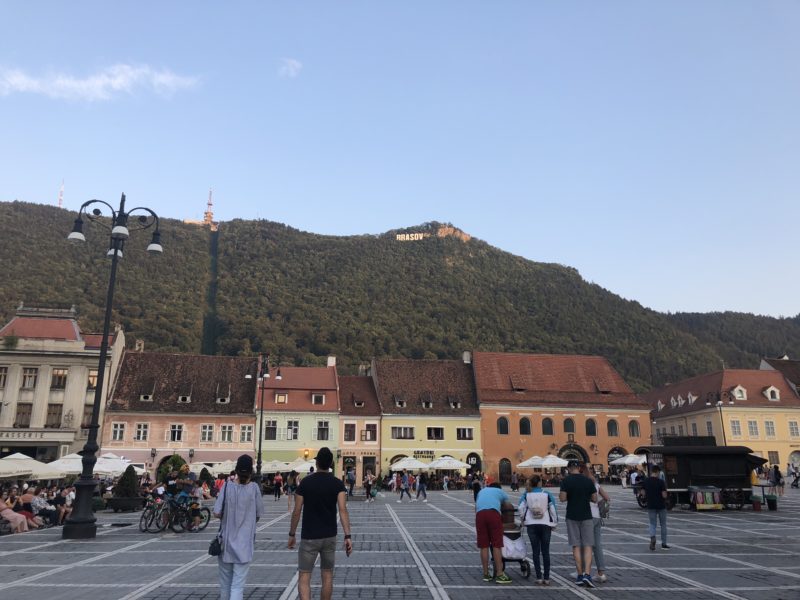 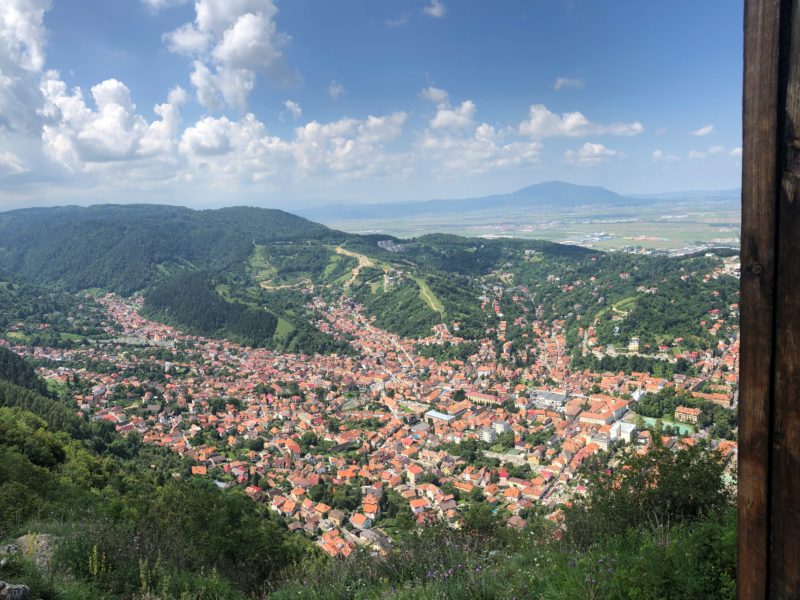 Bran Castle. This castle outside of Braşov is regularly known as “Dracula’s Castle.” While there is no evidence the real life Vlad the Impaler, who inspired Bram Stoker’s Dracula, ever actually visited Bran Castle, a lot of people think it matches the description given in the 19th century novel. In actuality, it was used as the summer home for the Romanian royal family until 2009 when the government opened it to the public.

It is less a Dracula tour than seeing the old Victorian-era furniture, but still a nice visit for a day. 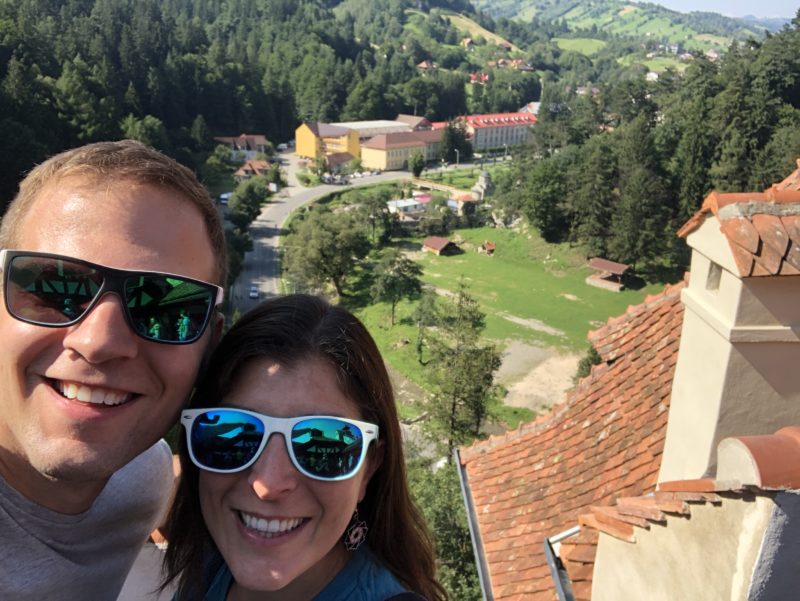 Raşnov Fortress. The second stop on our day tour was to this old fortified city located on a rocky hilltop in the Carpathian Mountains. More interesting than Bran Castle, it was fun exploring the well preserved walls and rooms, and seeing the beautiful views of the countryside of Transylvania from the lookout towers. 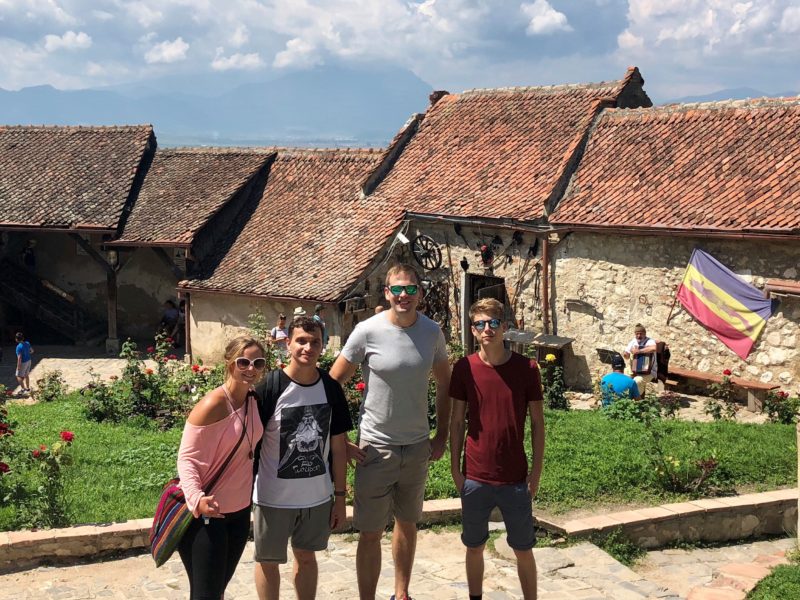 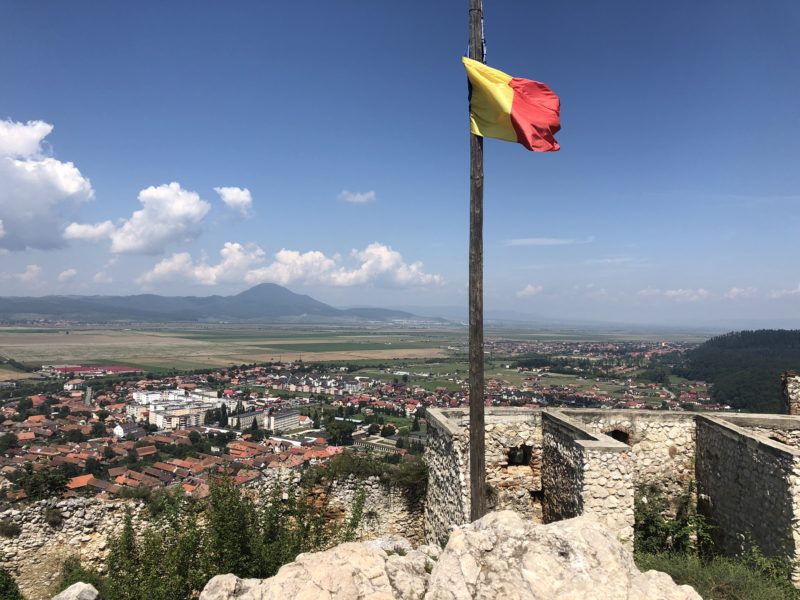 There isn’t a ton going on in Transylvania, so only a few days is necessary in each town. That being said, if you are really into castles and green spaces, you may really love this part of Romania!

We live in a pretty incredible place. ✨ So man

So happy my parents made their way to Utah to cele

Leaf peeping with @thekarenstone. So many gorgeous

Growing up in the PNW, I loved how green it was ye