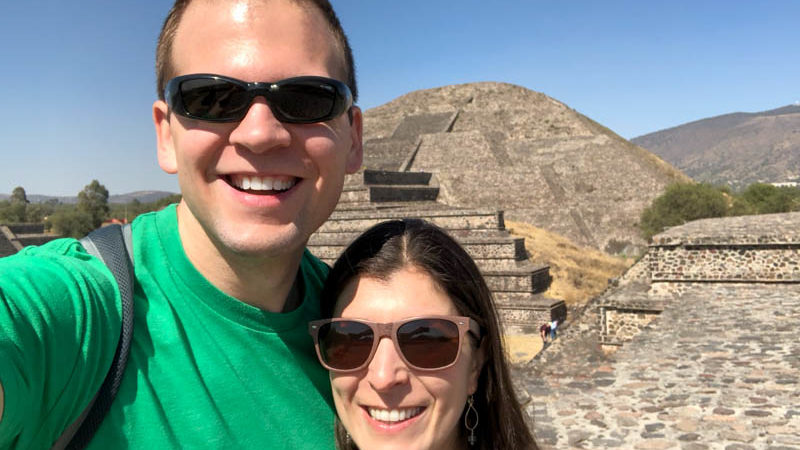 We are nearing the end of our vacation before heading to Costa Rica. We are currently enjoying the time in Tulum to relax and act “healthyish” by working out daily at the local Crossfit, eating a ton of vegetables and fresh fruit, and getting to try Herbalife in real life. 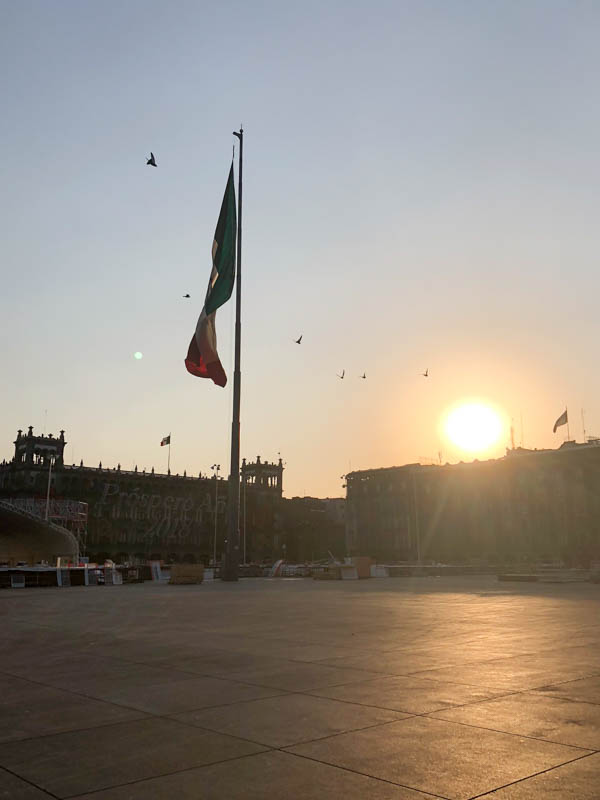 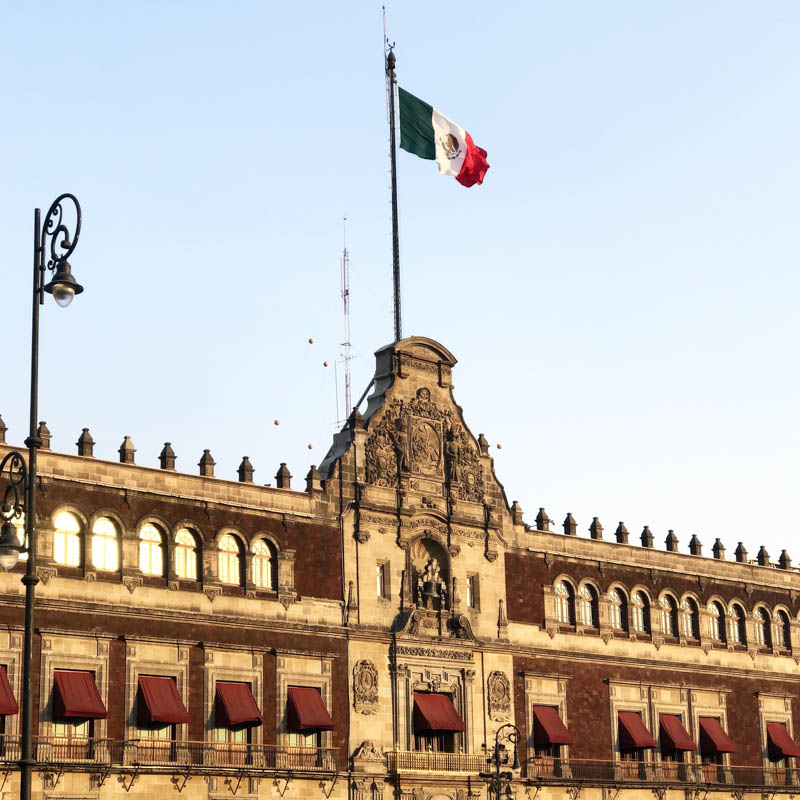 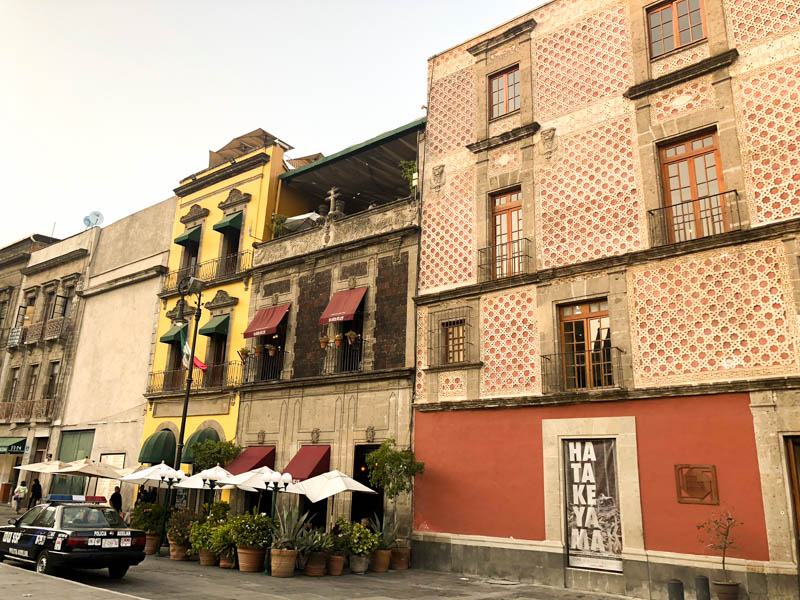 More on Tulum soon, but first a little recap on our visit to Mexico City.

A few folks seemed somewhat confused when we said this would be our first stop. Why the largest city in Mexico? Well for starters I kept hearing so many good things about Ciudad de Mexico (which is conveniently shorted to CDMX). My good friend Molly went last year and loved it. Bon Appetit and even Portland Monthly recently wrote about all the delicious food there. 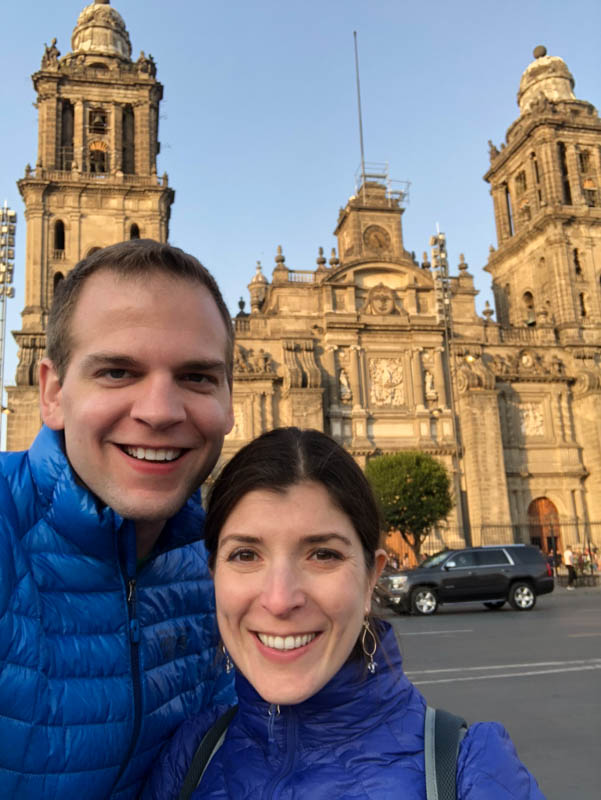 While I do like some relaxing beach time, I am more of an explore-the-city kinda traveler so this sounded great. Plus it was relatively cheap, easy to get to from PDX and on the way to Costa Rica, so it all seemed to align.

El Patio 77: We elected for a traditional bed and breakfast. Beautiful artwork throughout the lobby and rooms, the softest beds and delicious breakfasts made our stay here really great. While not in the heart of the trendy areas (Condesa and Roma), Ubers are so cheap (about $3 for a 15-minute ride to the other side of town), it wasn’t really a problem. 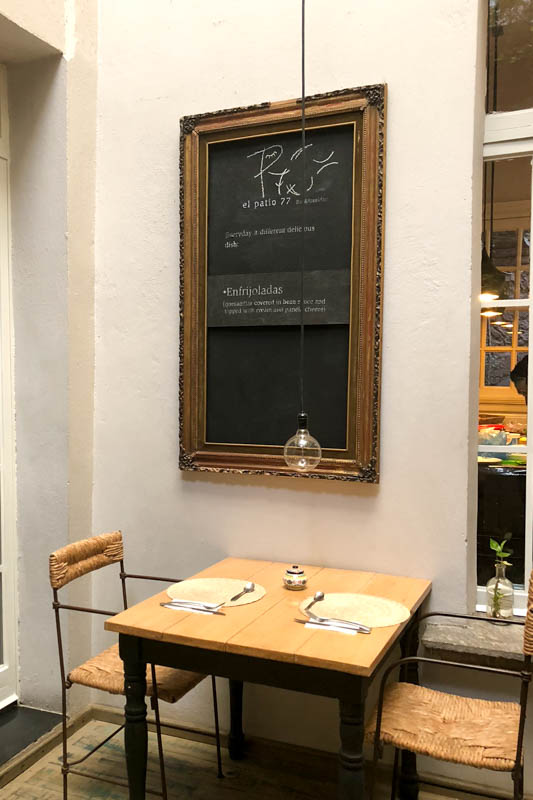 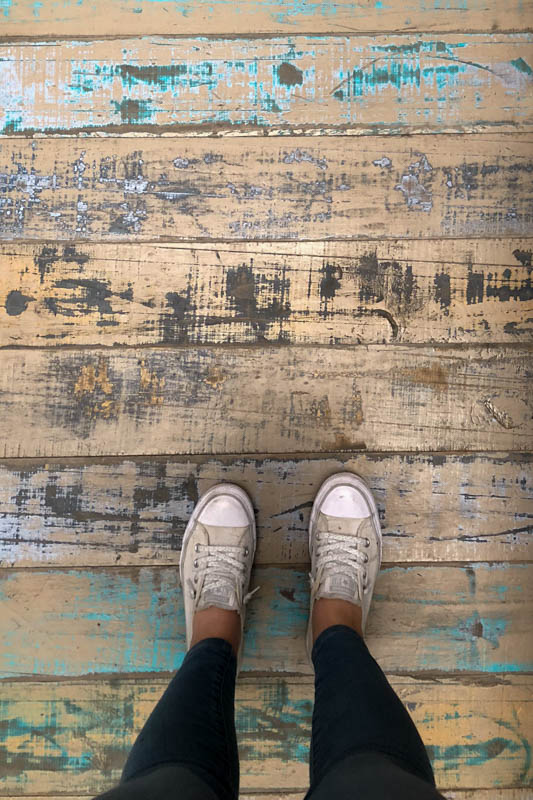 The breakfast entrée varied each day but began with coffee or tea and a bowl of fresh fruit and yogurt. A dish like fried eggs atop soft corn tortillas smothered in a red enchilada-esque sauce would get us started. 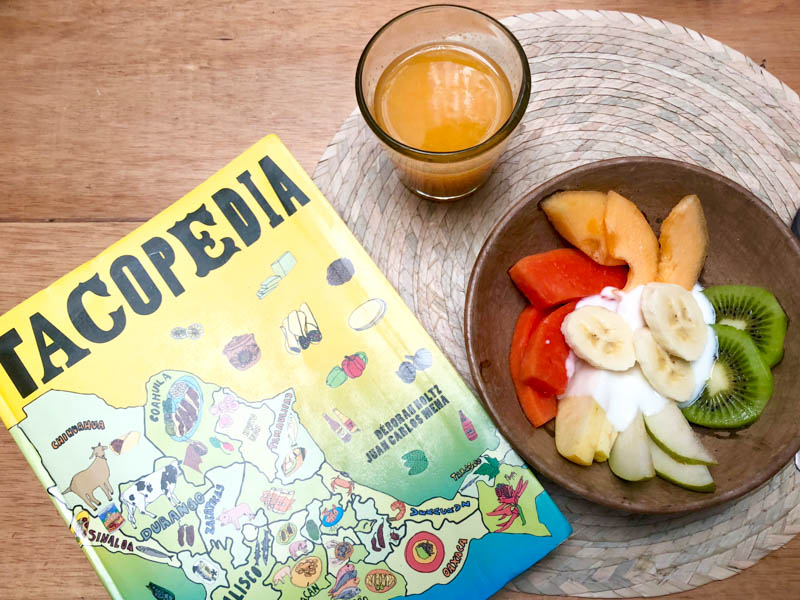 The two women who made breakfast and cleaned the rooms each morning traveled two hours each way to get to the B&B! We were told because CDMX has become so expensive and there aren’t good jobs further out, people regularly travel that far for work. Makes my commute back in Oregon seem not so bad at all… 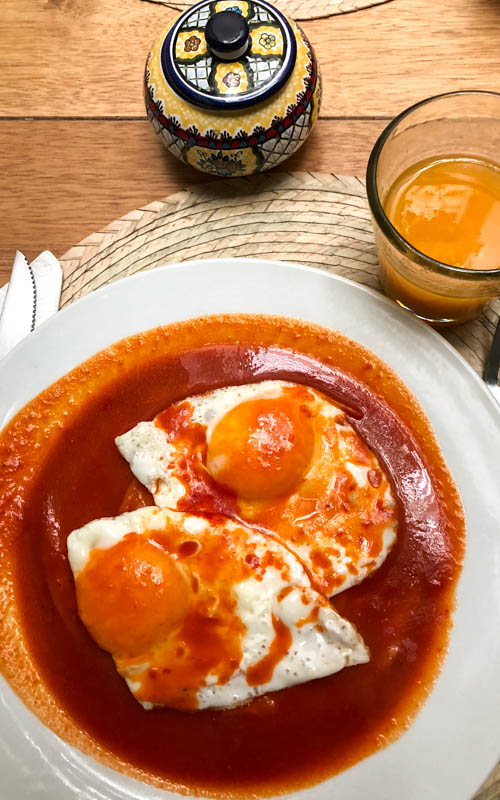 What We Saw & Did

Sunday Funday: Our first full day was a Sunday where the city closes several main streets to pedestrians. Without the cars everywhere, hundreds of locals came out to walk, jog, rollerblade, or bike throughout the city. Not only did it make for some fun people watching, but it was awesome introduction to CDMX. 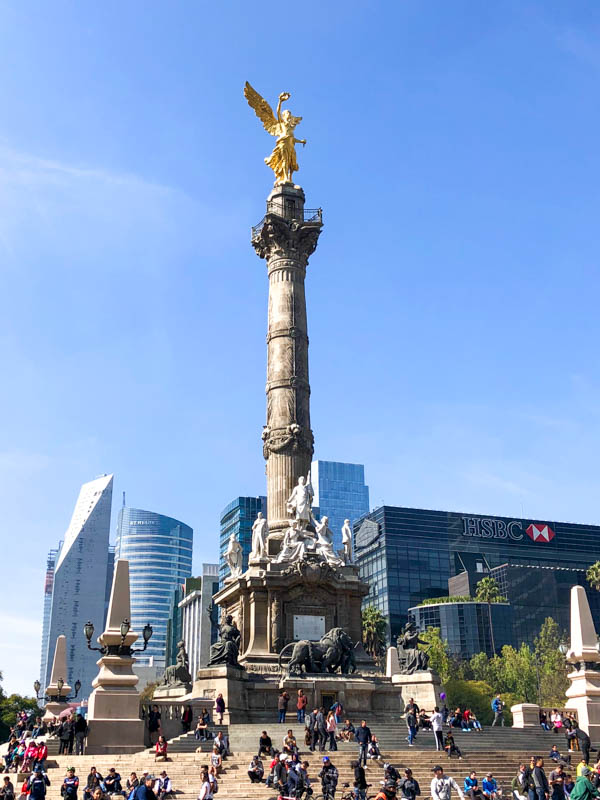 Museo Nacional de Antropologia: The National Museum of Anthropology is probably CDMX’s most popular tourist attraction and for good reason, with significant artifacts from Mexico’s history like the sacred Aztec calendar stone. The architecture outside including their rain oculus were also stunning. For less than $4 USD, it was definitely worth a visit. If you do happen to go, know in advance the museums are closed on Mondays and a lot of plaques are written only in Spanish. (Good practice for me!) 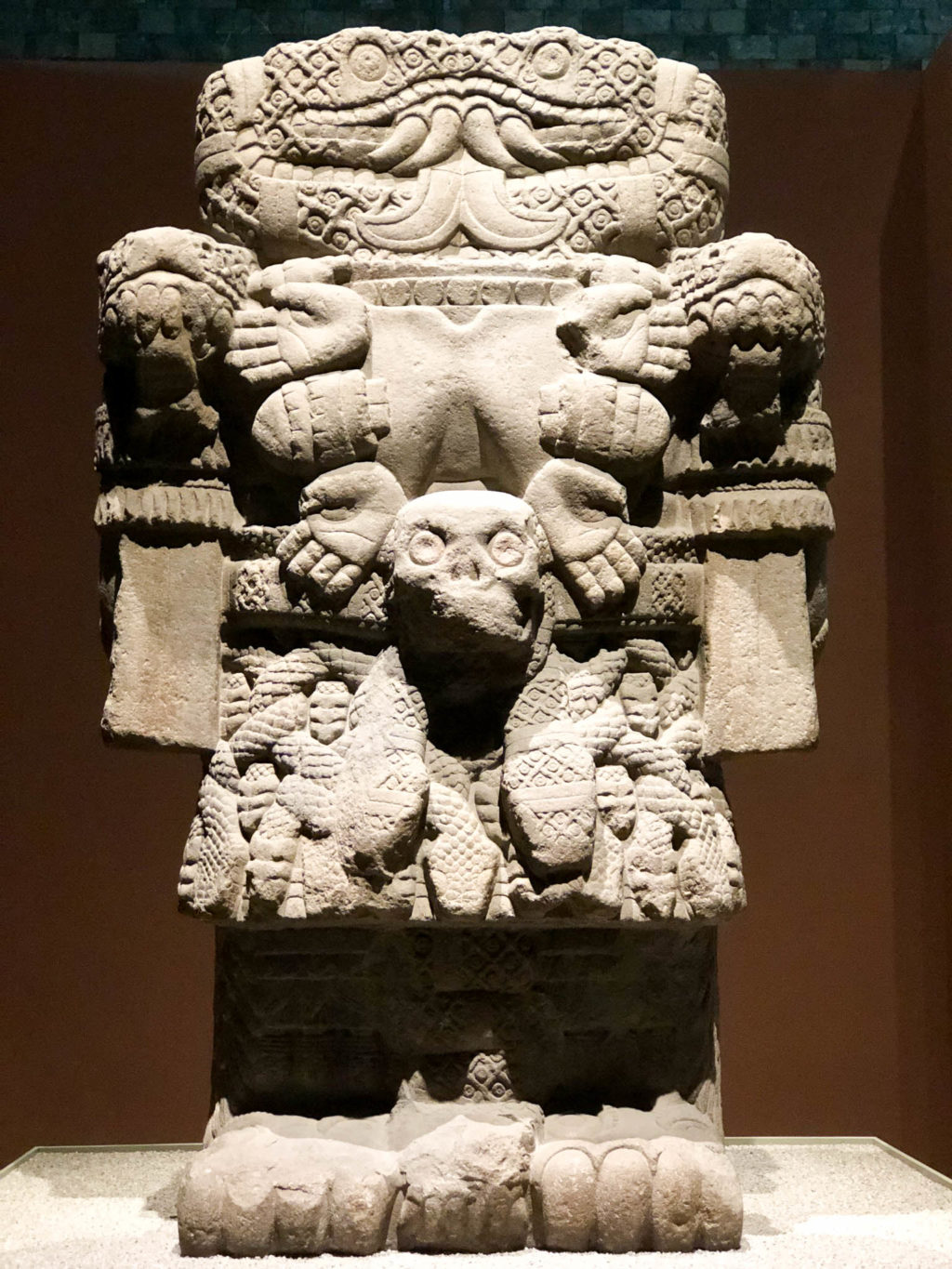 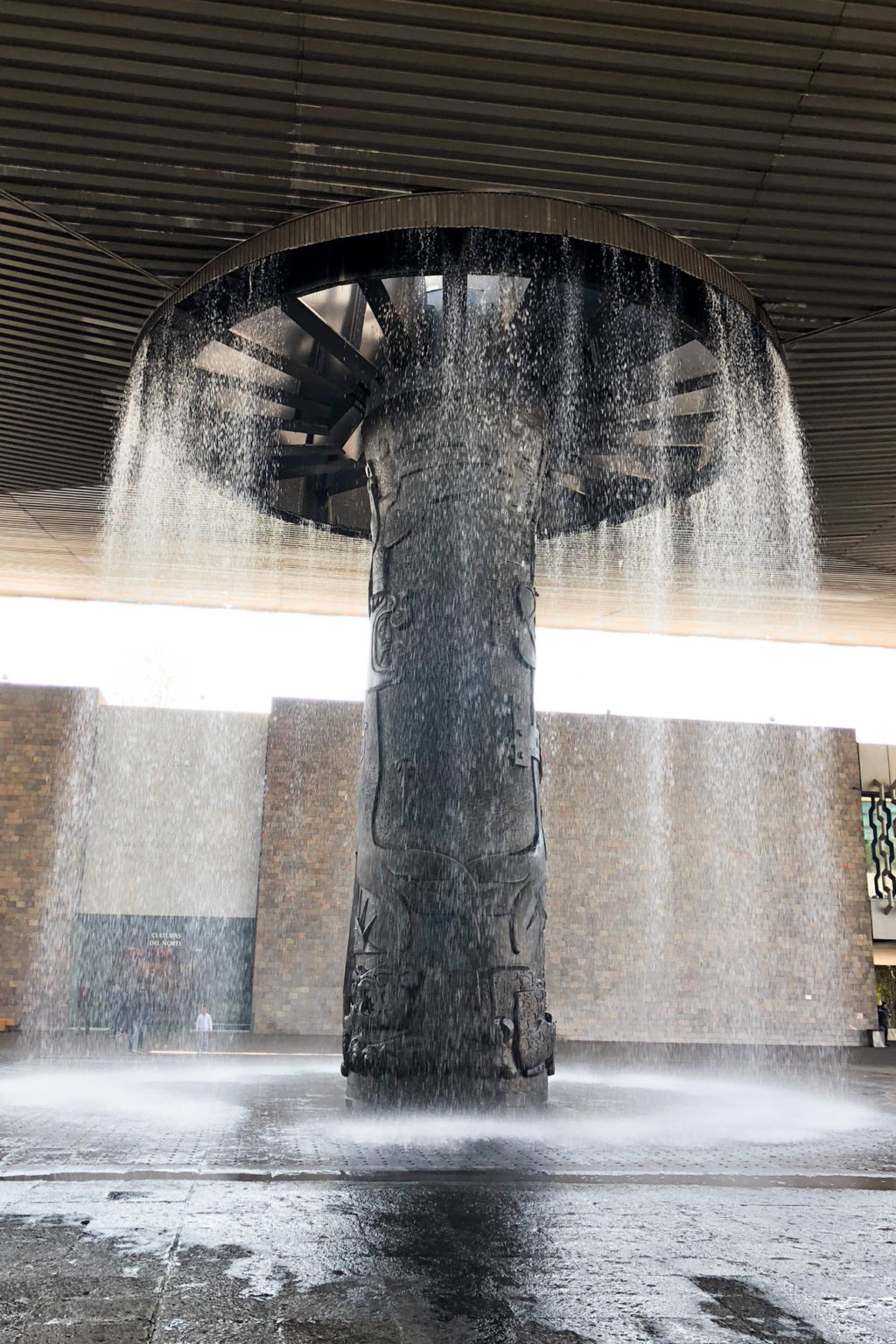 Going for a Run: One day, we braved the smog, congestion and elevation (CDMX is at about 7,500 feet) and went for a long run around the city. The 2-3 miles to the park was not the prettiest, dodging street vendors and pedestrians on their way to work, but once we got there, we were digging the running track and slightly ridiculous outdoor workout equipment. 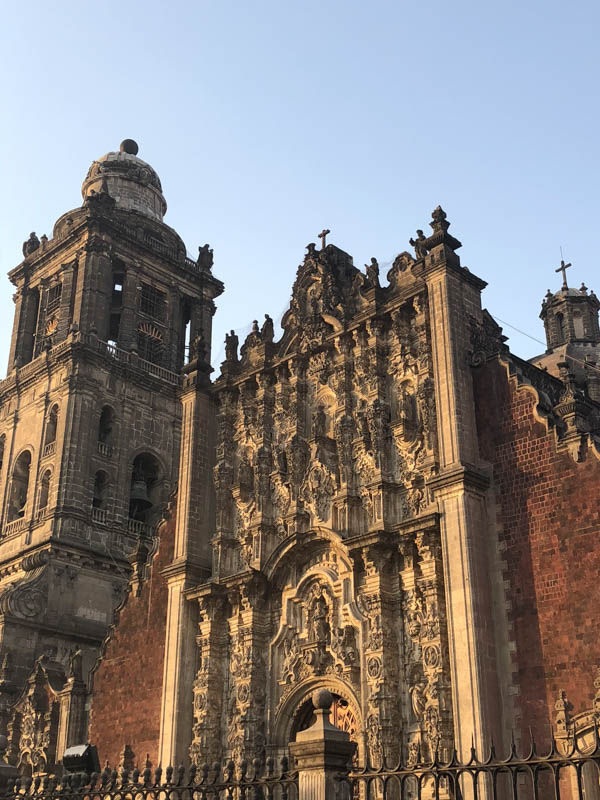 Teotihuacan Ruins: Just an hour drive outside the city, you can find this massive ancient Mesoamerican city, covering 32 square miles with several temples and monuments in pristine condition. Despite the fact that this is probably not the best for preserving such archeological discoveries, you’re even allowed to climb the two main temples – the Pyramid of the Sun and Pyramid of the Moon, for beautiful views of the complex and surrounding areas. 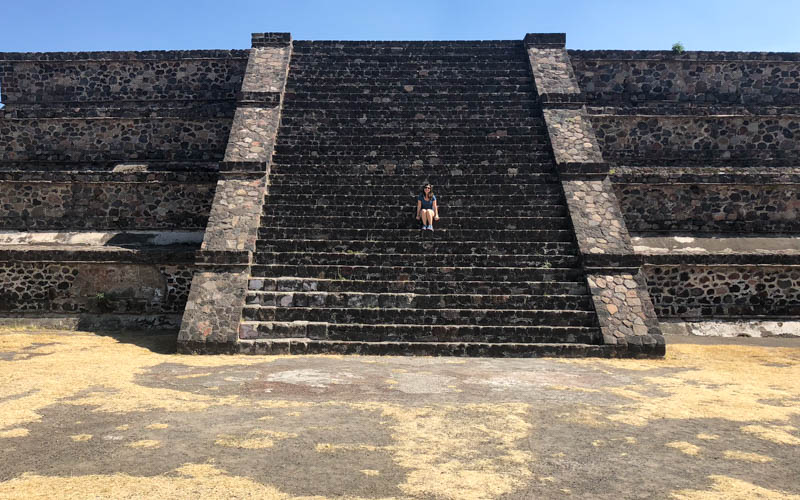 While you could certainly just walk around by yourself, we opted to hire a guide to take us around and share some hidden sites with us. For only $18, we were able to get an Uber there, then take the public bus back to town once we were ready to head out. 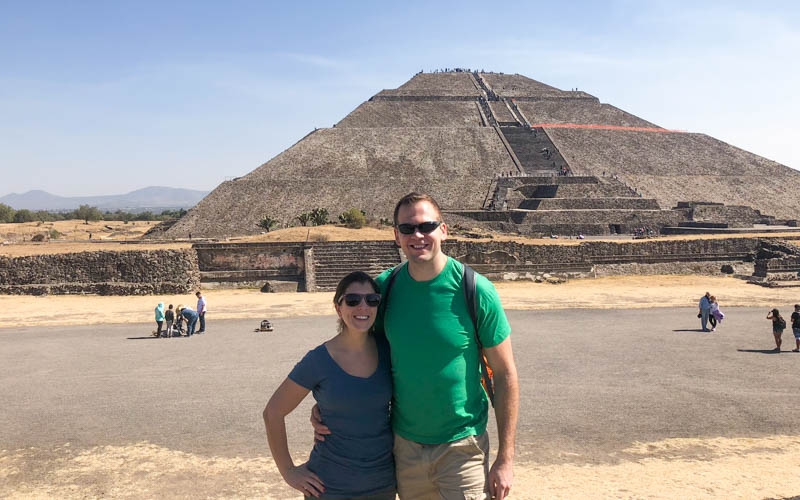 Lucha Libre: Even if you don’t follow wrestling of any kind, I’m sure you’ve heard or seen photos of Mexican wrestling. Similar to the WWF, there are ridiculous storylines and names, with the wrestlers wearing crazy masks that they refuse to take off. Although it wasn’t the most fun evening – it was VERY cold in the arena and they oddly didn’t have commentary or music playing during the matches – it was still amusing to experience.

Street Food: There is so much good street food to be had in CDMX. Yes, it seems a little sketchy at first but if you find one that looks like it has freshly cooked meat, is clean and locals are eating at, try it out. We had some of the best food at street stands. And it was definitely the cheapest, only costing around 50 cents for a giant taco. 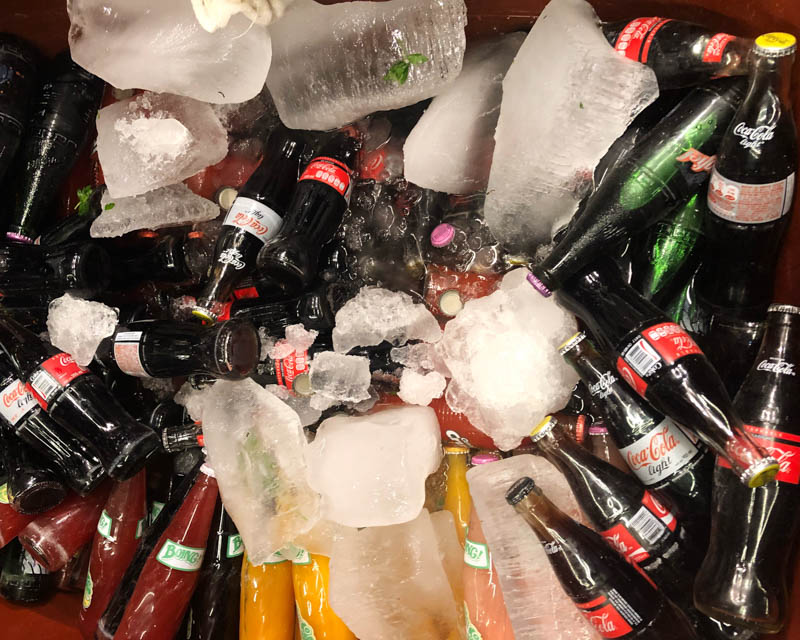 Some of our favorite dishes were:

Arab Tacos: Lebanese gyros meets Mexican tacos. The meat is cooked like a gyro on the spit, often pork al pastor (spiced pork), then shredded, placed into a soft pita and folded like a taco.

Huaraches: masa dough rolled and pan-fried to order, smashed pinto beans, spicy green salsa, tons of melty cheese and the filling of your choosing like seasoned chicken or scrambled egg. (See it being made on this post.) 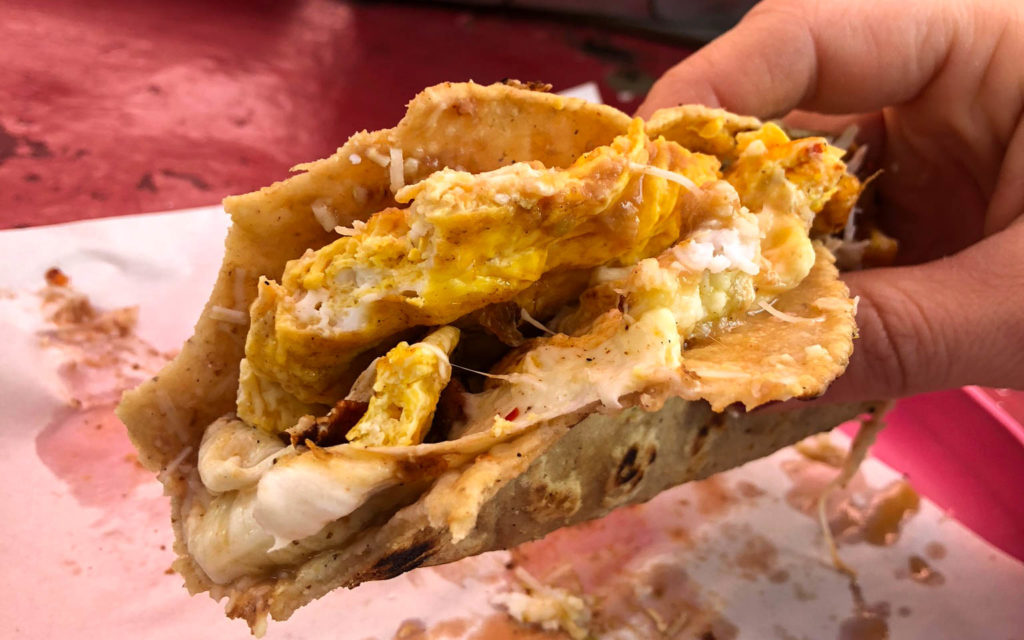 Markets: I loved wandering through all the markets, of which there are several in CDMX. They were filled with melons, avocados, jicama, spices, flowers, and anything else you’d want. Several food vendors serving up tacos and other dishes were everywhere. 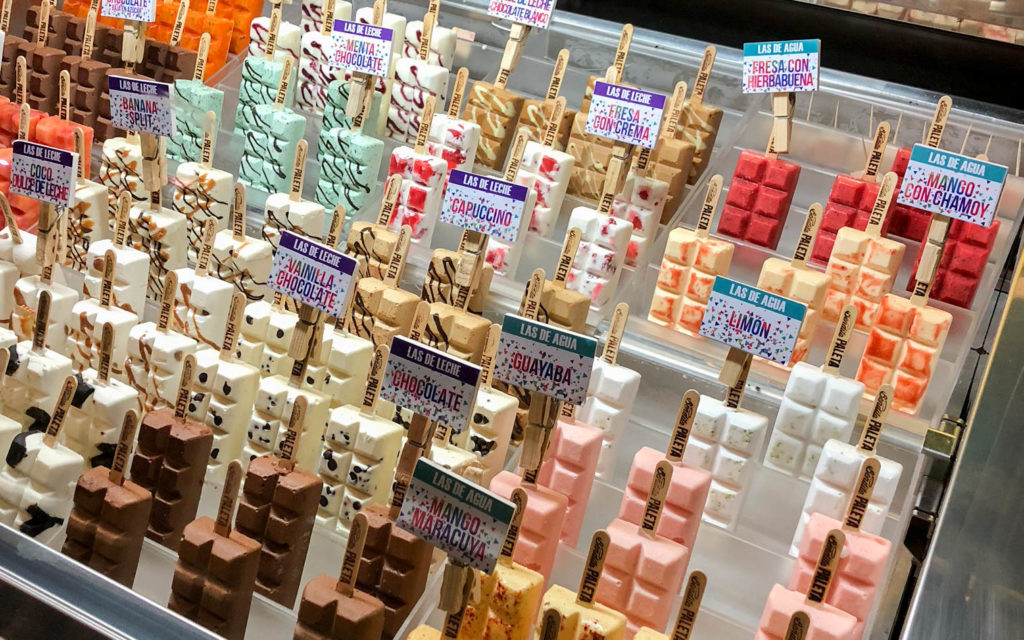 Tres Galeones: Another awesome recommendation from Molly. Their seafood tacos were outstanding, beautiful presentation and clean space. They are small and cheap for a US traveler (about 35 pesos, $2 USD), so you can try several. My favorites were the lightly fried soft-shell crab topped with cabbage and salsa, and the lettuce tacos with grilled shrimp and coconut, wrapped in romaine lettuce. We were so excited when we found out they had another outpost in Tulum as well! 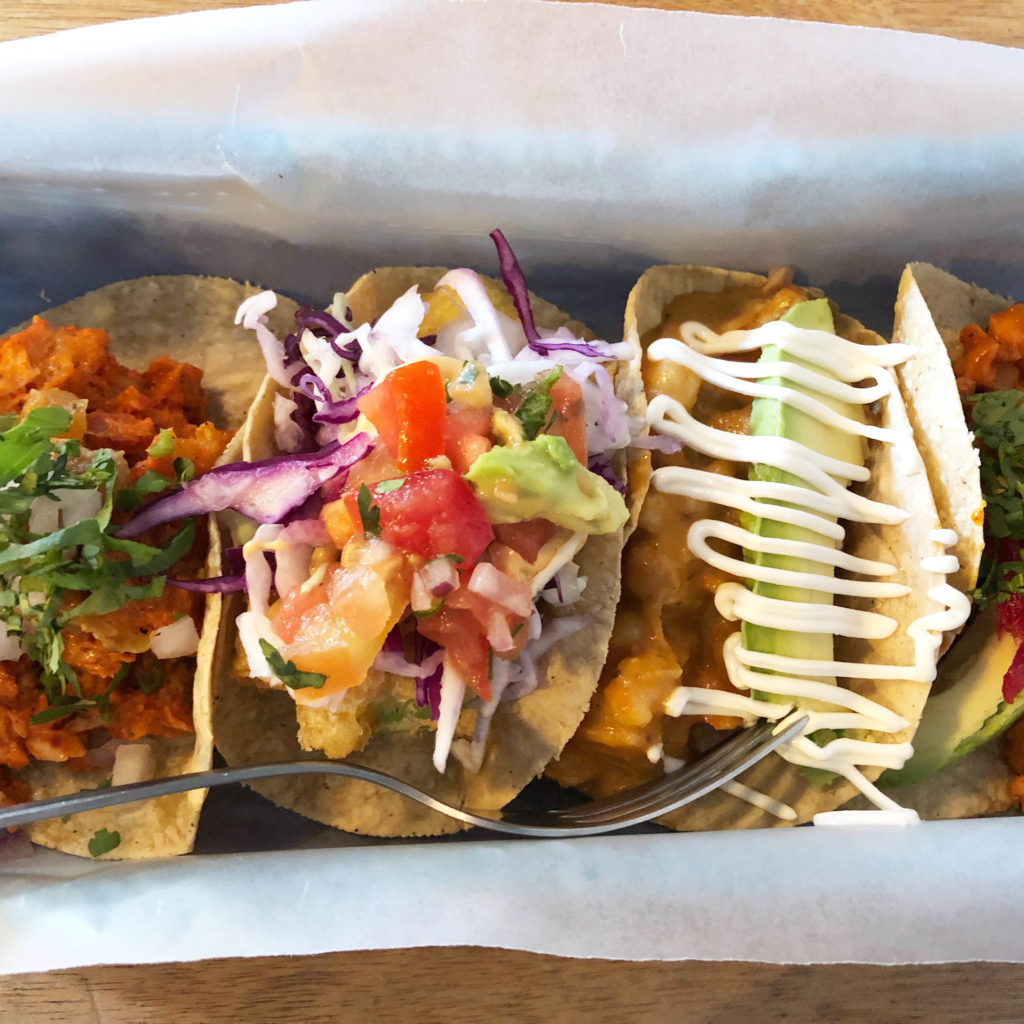 Trattoria Giacovanni: Beware most restaurants are closed Sunday evenings for “family day.” (Awesome concept, challenging as a tourist!) We ended up at a surprisingly excellent Italian restaurant. Their housemade complimentary bread was addictingly good. And Brice was like a kid in a candy store getting fresh pasta tossed in a parmesan cheese wheel.

We were both really impressed with CDMX. It is a clean, cheap city with great food, friendly people, beautiful artwork, and a lot of parks. The biggest negative was the smog. After being there four days, it started to really get to us, so we eagerly hopped on a plane to the beach. That being said, I would happily return to experience the several other restaurants, museums and markets I wasn’t able to squeeze in on this trip, and definitely recommend Ciudad de Mexico! 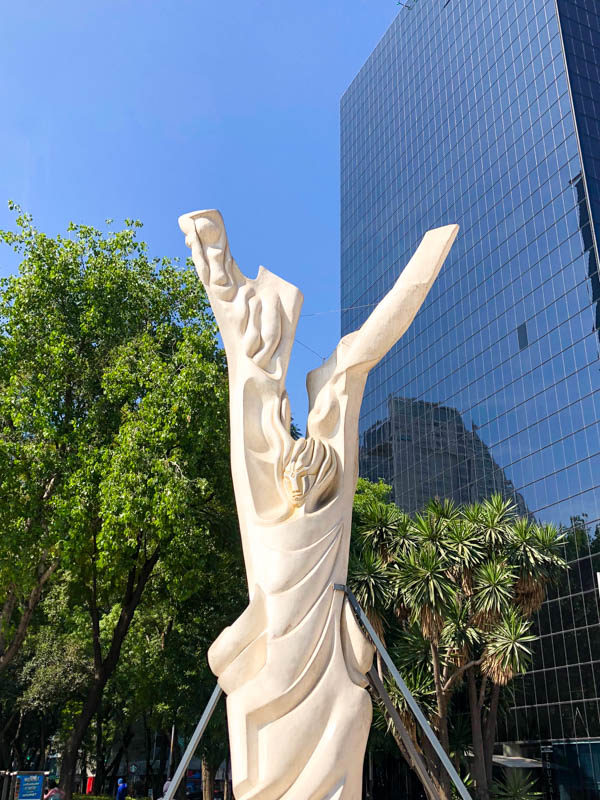 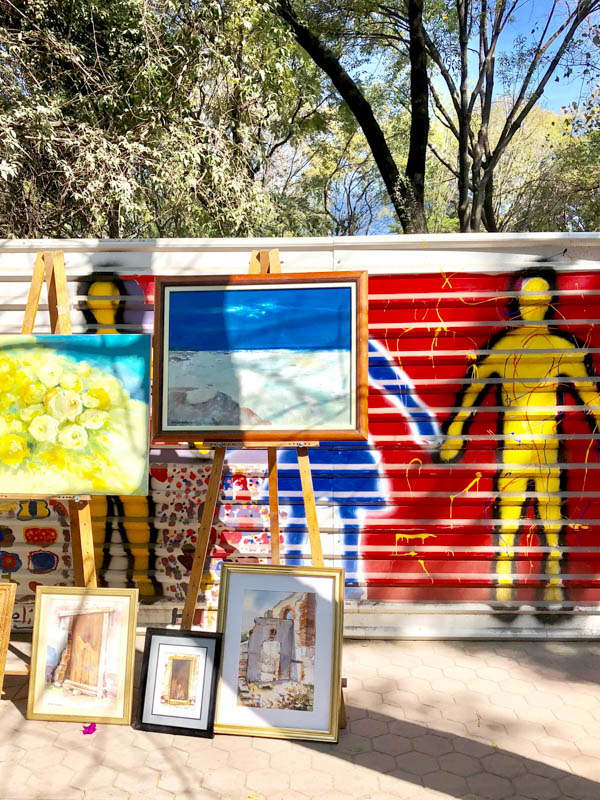 Sending lots of love from Mexico! If you need more of me, don’t forget to follow me on Instagram at @BingoAbroad where I’ve been posting photos and Instastories much more frequently. Cheers!

2 thoughts on “With Love, From Mexico City”