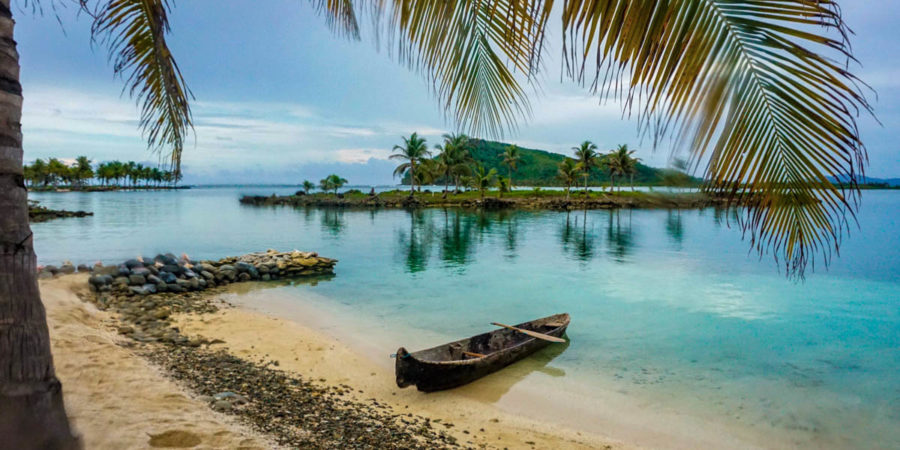 I am not a boat person – I get seasick super quickly; I have a crazy fear of dark, open water. The idea of sleeping on a boat sounds particularly horrible to me. So I wasn’t the most excited when Brice pitched a multi-day tour along the San Blas Islands that cross between Colombia and Panama. You want me on a boat for that long? Don’t think so.

Fortunately that wasn’t the pitch. He knows me better than that. 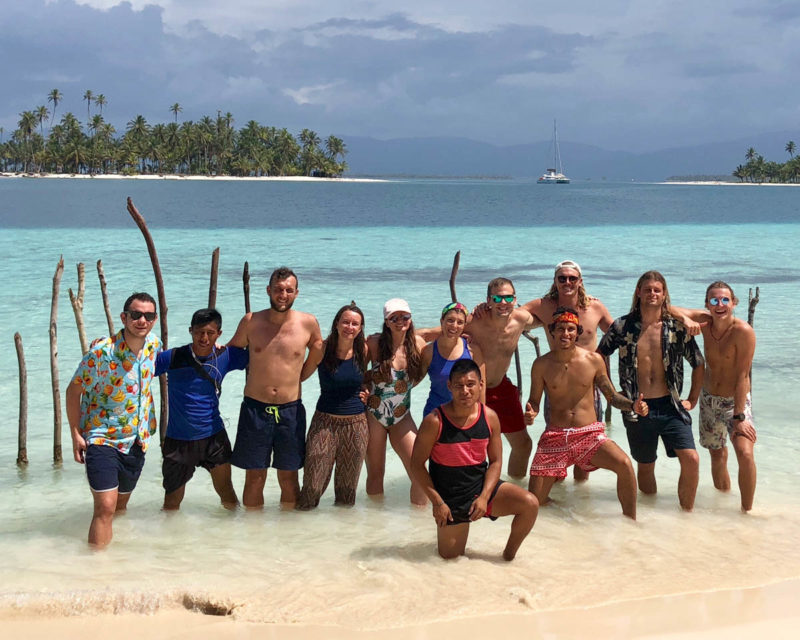 Instead the pitch was a tour with San Blas Adventures, five days hopping from island to island, sleeping on land, with no more than 2 hours on a boat at a time. Much more manageable.

And thankfully I agreed because it was easily one of the most fun adventures I’ve had on our trip so far.

What made it so great?

The remote Caribbean islands and crystal clear waters are stunning. Even the boat rides I found enjoyable, watching the islands pass by. There are about 365 in total but only 49 are inhabited. Some are so tiny and deserted with just one palm tree, they look right out of a cartoon. 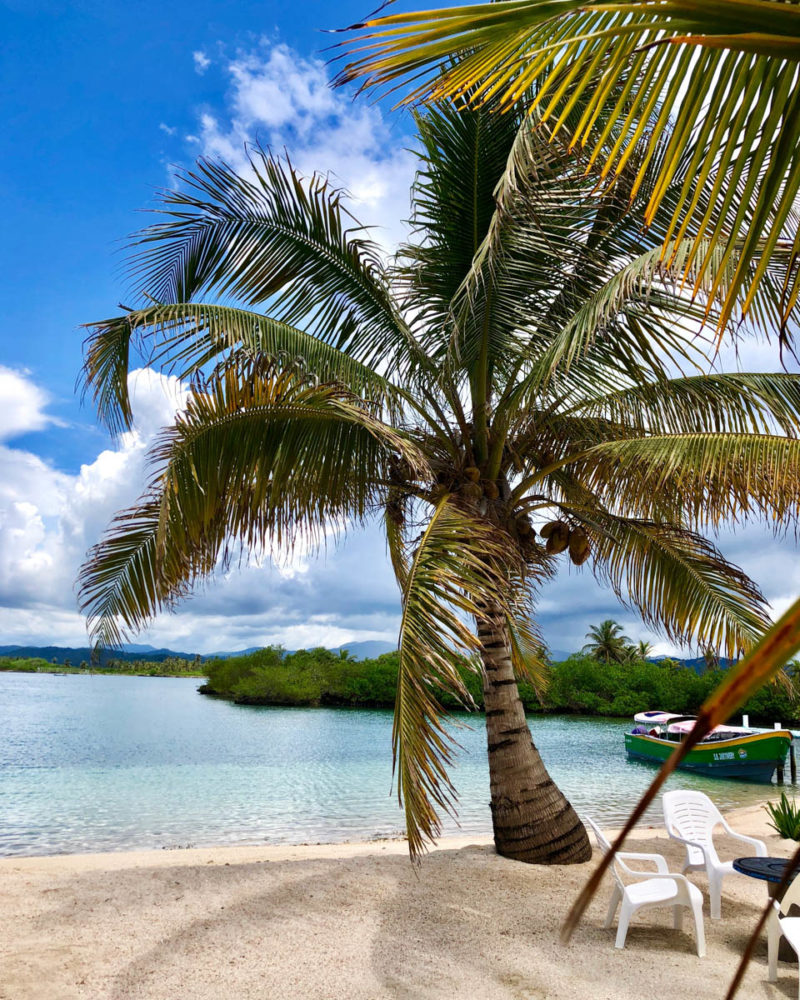 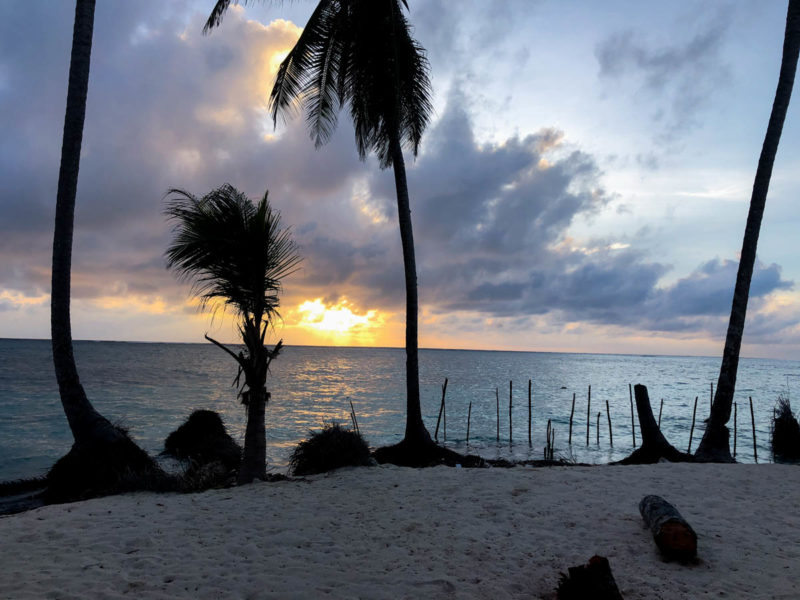 Who you travel with can definitely make or break a trip. We were lucky to hit the group tour jackpot. San Blas Adventures’ trips can get up to 30 people, but we were a really small yet awesome bunch – two guys from New Zealand, a couple from the UK and a friend duo also from the UK, along with our two guides from Colombia and Switzerland. We quickly bonded over shared travel stories, playing games, and drinking too much tropical rum out of coconuts. 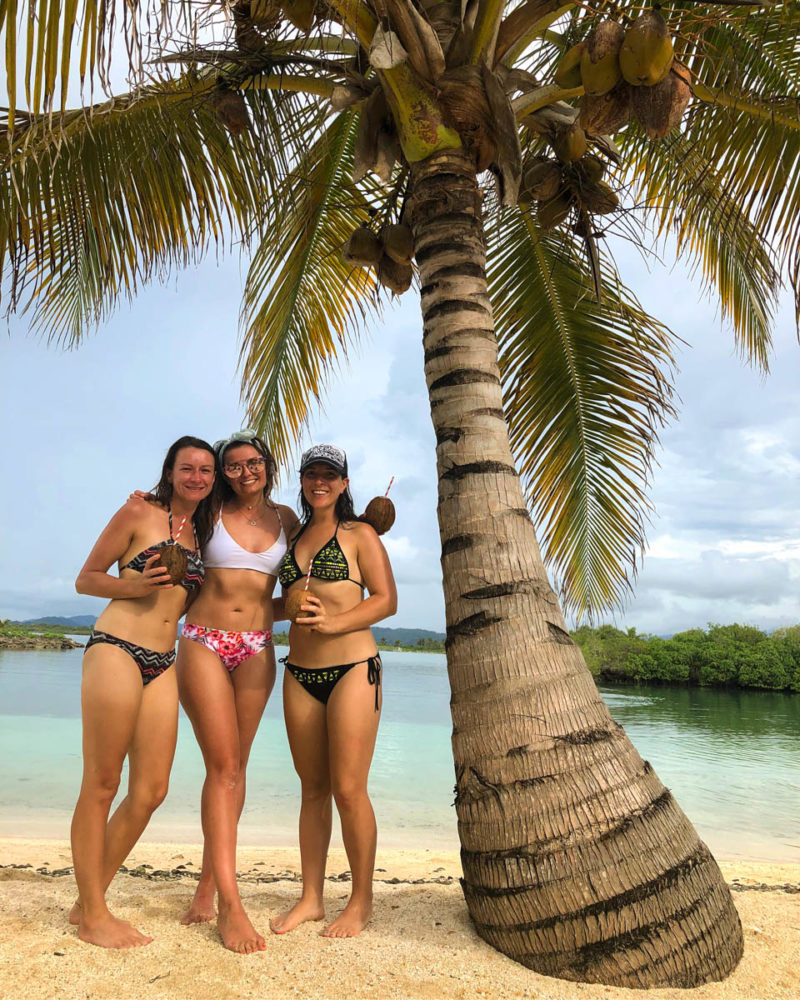 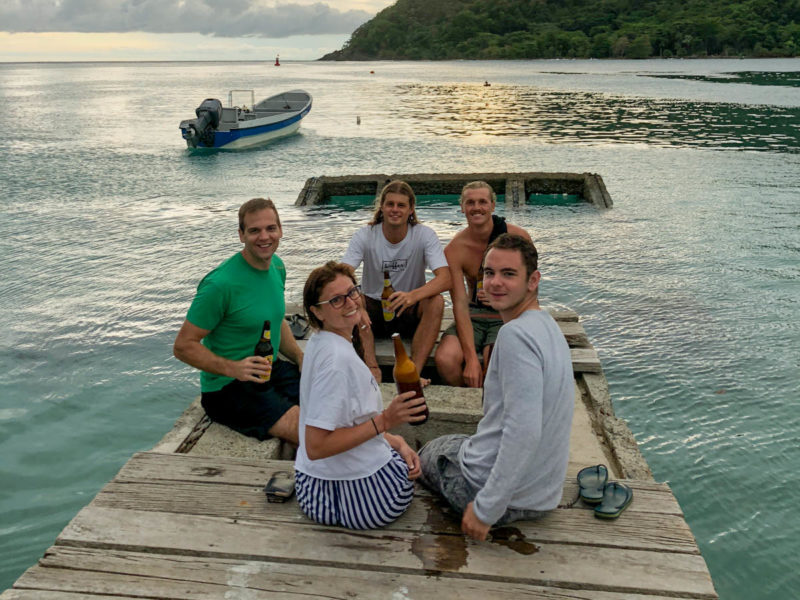 You really can’t go wrong if those are your day’s requirements.

Despite my fear, if you get me into clear water like this, I love snorkeling. Here we saw numerous starfish, huge schools of tiny fish, giant lobsters, and even a shark (though that last one terrified me).

One afternoon while taking a dip in the water after an intense game of volleyball, we spotted dolphins just a ways offshore. We excitedly all tried swimming after them, hoping they would play with us. Even though they weren’t as interested in us as we were in them, it was pretty special.

All the of the islands are owned by the indigenous Kuna community. With about 50,000 people living on 49 main islands, they mainly survive by allowing tourists to visit their islands and selling coconuts to the mainlands. They are so serious about their coconuts that every coconut you find has an owner. So don’t just go picking one up and throwing it against trees in an attempt to open it, unless you’ve paid for it first. Meeting the families, seeing some of their rituals and viewing their way of life was a nice addition to the trip. 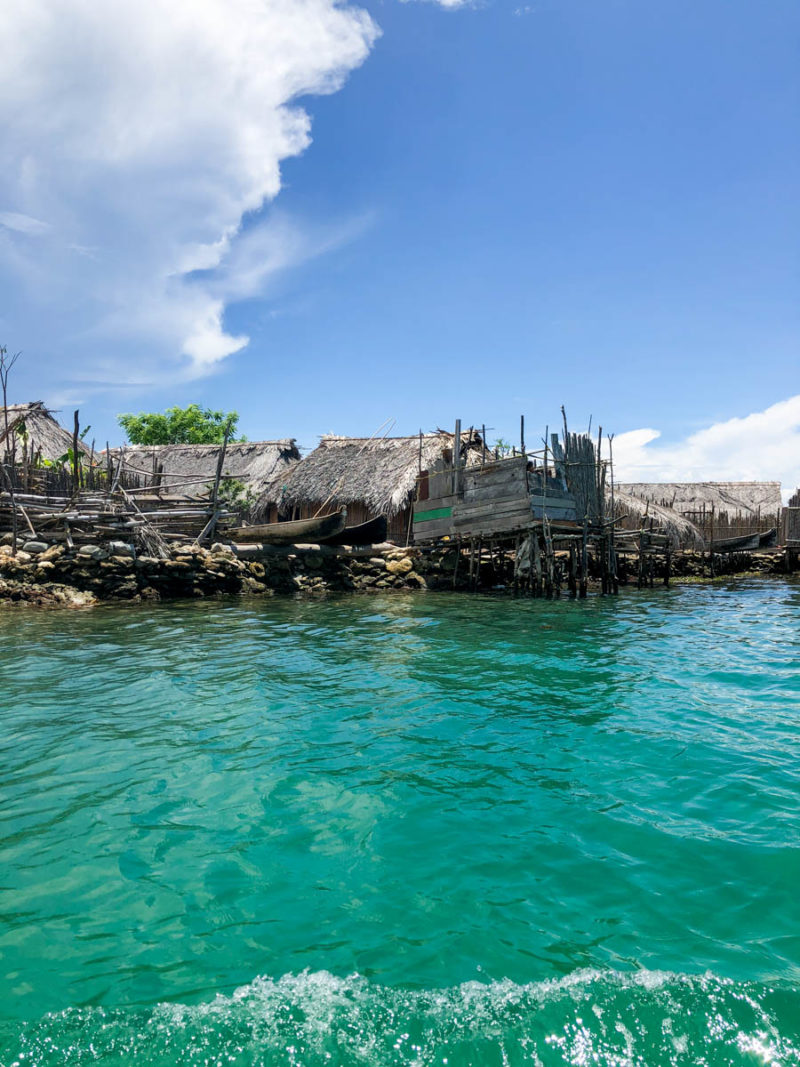 Eating So Much Delicious Food

I was incredibly impressed by the food at San Blas Adventures. Every day, no matter how remote the island, we were set up with delicious meals. From fresh caught lobster tacos to a variety of vegetarian salads, I was one happy camper. 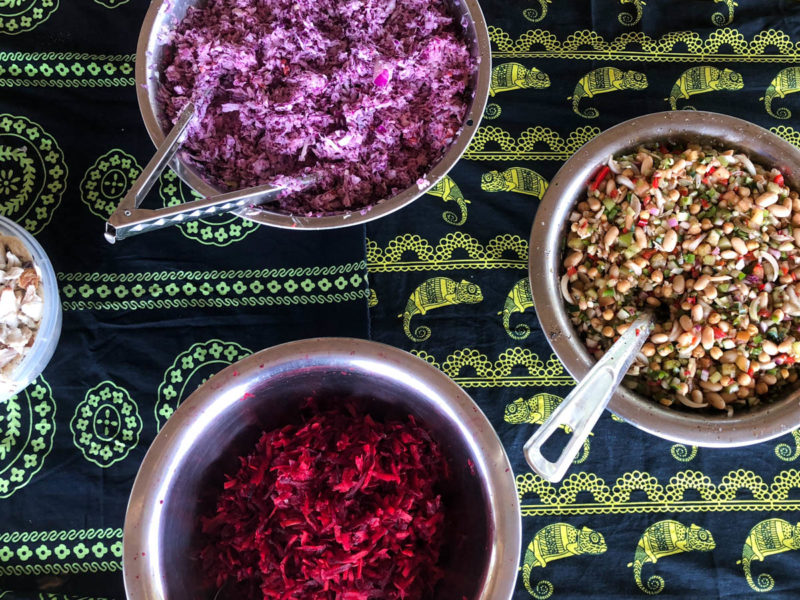 From quaint beach-side cabins to sleeping in “dorm rooms” just filled with hammocks (oddly comfortable!), the sleeping spaces were pretty basic. Most islands had just rustic toilets built above the sea. As for showers, you got a bucket of fresh water; not the best but it helped get a bit of the saltwater off you.

There is also no potable water on the islands but plenty of bottled water (and rum!) available for purchase. 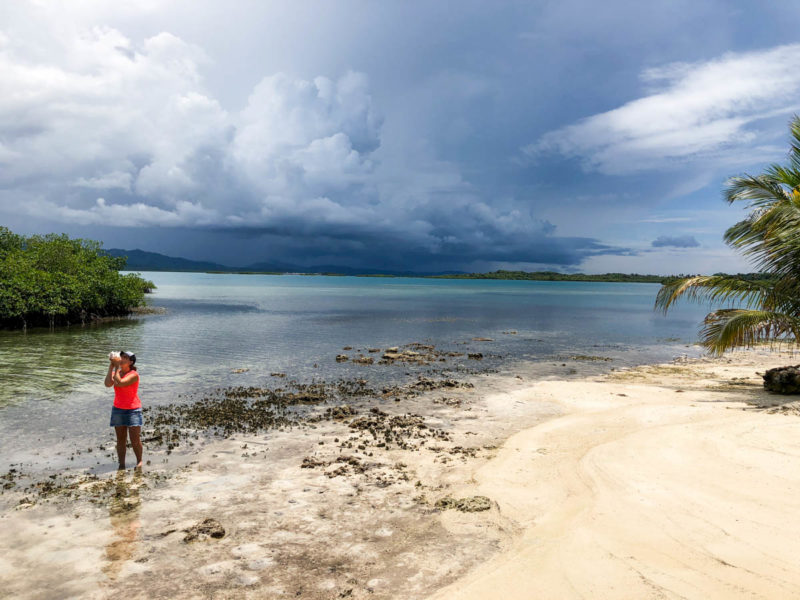 It is a little challenging getting to the tour start. First there is the voyage to Necocli, a small port town on the northern coast of Colombia.

We went from Medellin by taking a 30-minute flight then 2-hour drive, but others opted for an overnight bus (or took an equally long bus from Cartagena). After spending the night in Necocli (only very modest but also very cheap hotel options), we had to hop on the morning boat for a 90-minute wet ride to Capurgana.

From there, we finally met up with the rest of the group, got our passports stamped out of Colombia and onto another boat for 20 minutes to the tiny beach village of Sapzurro. It was small enough that I kept believing it was actually an island, despite it being fully attached to the mainland. Spending the night there, we enjoyed a good dinner and getting to know everyone over local beers on the dock.

The next day, we were finally officially on the San Blas Adventures trip. About 30 minutes into our day, we finally arrived at the Panama “border” island, where we got our passports stamped again. It was somewhat strange technically being in no country for the 10 hours prior, but the border patrol has no issues with it.

After all that, we were onto the islands. 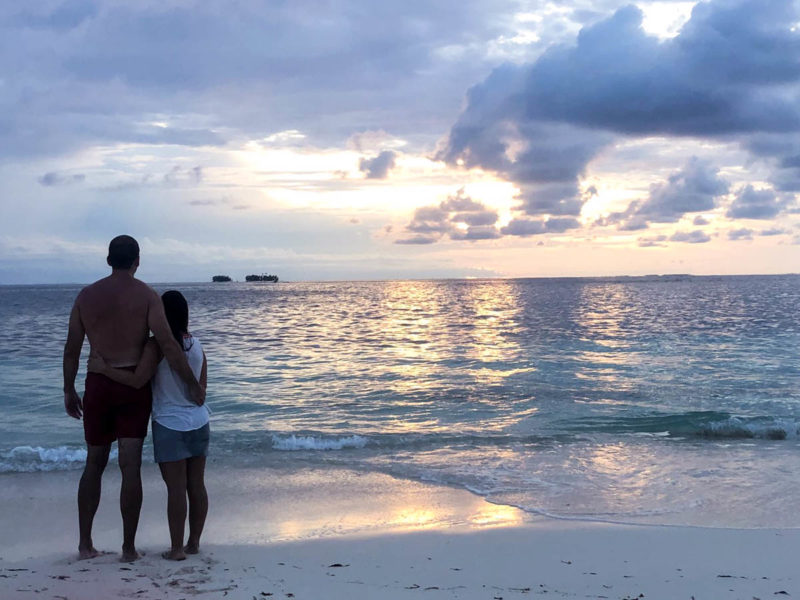